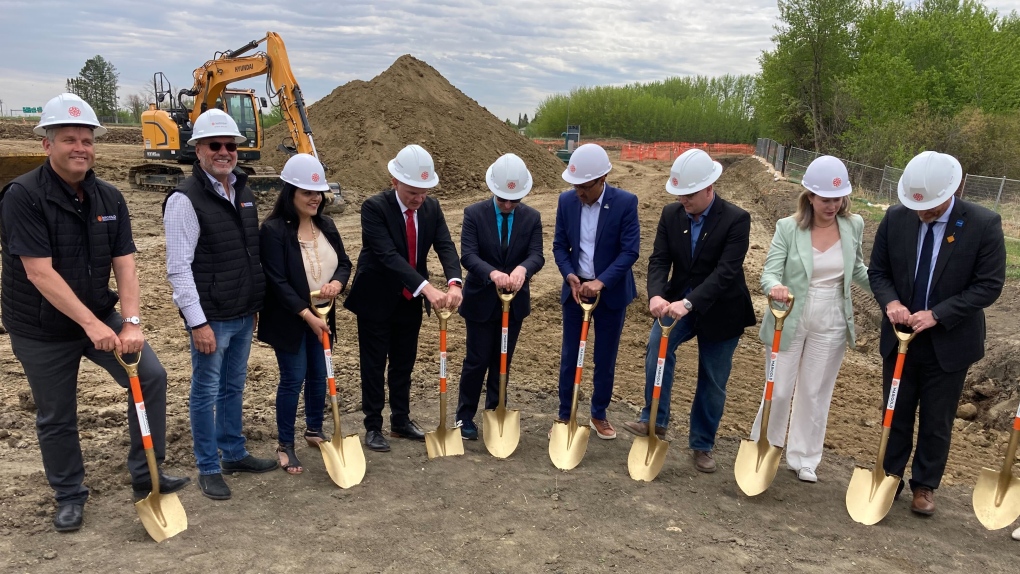 More of a photo opportunity than true start of the project’s construction, the groundbreaking was mostly a celebration of the work that started more than a decade ago to bring west Edmontonians’ wish for better rail transit to fruition.

“I’ve been attending the meetings as someone who lives right on the route since 2007 and it’s exciting,” said an emotional Andrew Knack, who serves the Nakota Isga Ward in west Edmonton and the city’s transit system advisory board.

“I love our bus system. It’s great. I took it to get here, that’s why I’m late – sorry, everyone,” he continued. “It was a great example of why – I’m not late because of the buses, I’m late because of how it’s designed. So if you think about the LRT, it’s going to have that designated right of way that allows residents from here to get into the downtown, to get into other parts of the city, quicker than any other method of transportation.”

The 14-kilometre line will run from 102 Street near Churchill Square to Lewis Farms, with 14 stops along the way, including at West Edmonton Mall and Misericordia Hospital.

Most of the route will be street level – for greater accessibility, city officials say – except at the hospital and mall.

“I don’t think there is a modern city in the 21st century without this kind of fixed rail transit, and I think that it says a lot about the long-term vision of this city and the folks who help run it that saw that, and the residents of this city who see that,” added Ward sipiwiyiniwak councillor Sarah Hamilton.

Construction is expected to continue into 2027, although the head of the city’s building department cautioned projects of this magnitude often run into challenges.

“We need to be prepared and manage expectations with Edmontonians that if something does happen, we’ll do our best to resolve it,” Adam Laughlin told reporters on Friday.