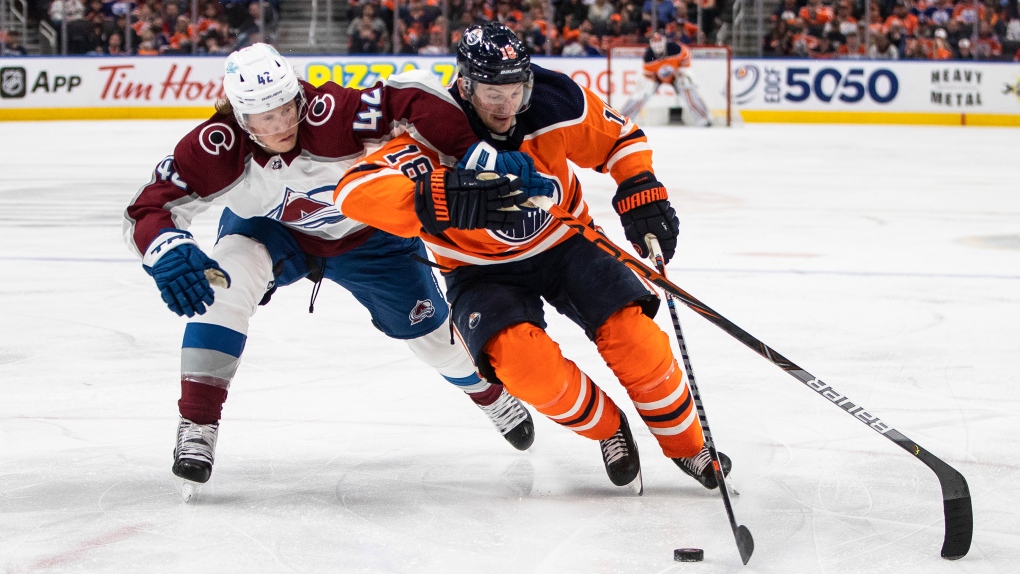 Josh Manson wants to do everything he can to beat the Edmonton Oilers.

That doesn’t mean the Colorado Avalanche defenceman will be cutting off communication with his dad during the NHL’s Western Conference final.

Dave Manson — a nasty blue-liner during his playing days, and an assistant on the staff of Oilers interim head coach Jay Woodcroft — sent his son a text message prior to Game 6 of Colorado’s second-round series against the St. Louis Blues.

“Go win this game so I can come see my granddaughter.”

Josh Manson and the Avalanche obliged, paving the way for a family reunion in Denver for grandpa and two-year-old Gemma Grace following Monday’s practices.

“We had some good time,” Josh Manson said Tuesday prior to Game 1. “They played a bunch and she was all over him.

Manson joined the Avalanche from the Anaheim Ducks ahead of the NHL trade deadline, and has fit in nicely as part of a defence corps that includes Norris Trophy finalist Cale Makar.

The 30-year-old had seven points in 22 regular-season games with Colorado to go along with one goal and four assists in 10 playoff contests this spring.

The younger Manson said there was no way father and son would avoid contact during the series.

“Family comes first,” said the 160th pick at the 2011 NHL draft. “That’s been my dad’s motto, always. It’s different because he’s behind the bench.”

Josh Manson said they often talk hockey, but never about each other’s teams.

“The relationship doesn’t need to change (for this series),” said the pending unrestricted free agent. “He’ll be there for me and I’ll be there to talk to him about whatever. I don’t think there’ll be (any) lines crossed.

“We’ll keep our secrets to ourselves, but we’ll still have that good relationship.”

Dave Manson played a total of 1,215 regular-season and playoff games — registering a combined 3,135 penalty minutes — in an era when defencemen could get away with a lot more than what’s allowed by today’s officials.

“I watched some games, but when I watched games I didn’t study them,” Josh Manson said of a career that spanned from 1986 through 2002. “I just heard from other people the way he played.”

The elder Manson, who joined Woodcroft in Edmonton from the AHL’s Bakersfield Condors in February following Dave Tippett’s firing, played for six NHL teams, including three seasons with the Oilers in the early 1990s when Josh was in diapers.

“I remember some spots throughout my dad’s career,” Josh Manson said. “He got traded (by the Chicago Blackhawks) to Edmonton right after I was born.”

Josh Manson said even though the game is called differently in 2022, there are still things he looks to mirror from his dad’s game.

“He was somebody that defended hard in front of his own net,” he said. “That’s something I try to take in my own game.

“We skate very similar, I’ve heard. Just trying to play that hard-nosed, tough-to-play-against style of game that he did so extremely well.”

“Unless I’m really in a slump and he can’t hold it in anymore — then maybe he’ll say something,” he said. “But it’s always short and he’s so good at reading your body language and tone of voice.

“Knowing when to push and when to back off, I think that’s what makes him a good coach as well. He knows how to handle situations. There’s never too much advice. I think through this series, there’ll be even less.”

But the big question: Who will Gemma Grace, a little too young to understand hockey, going to be cheering for in the series?

“She does love her grandpa,” Josh said with a smile. “But she better be pulling for me.

This report by The Canadian Press was first published May 31, 2022.