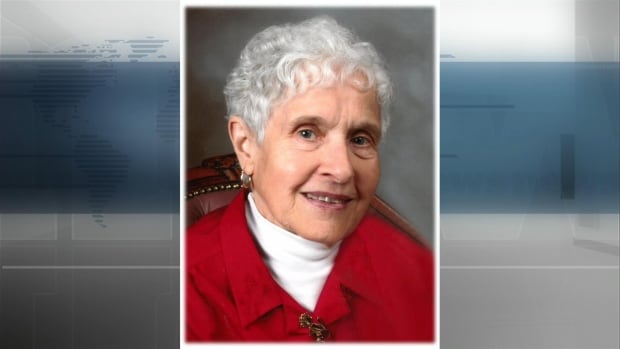 An Edmonton woman was sentenced Wednesday to 10 years in prison for the death of an 83-year-old great-grandmother.

Victim impact statements read before the court Wednesday describe Micieli as a loving woman of faith who held together generations of family, her loss leaving a hole in the lives of relatives and fellow residents alike.

“I don’t understand how anyone can harm a tiny frail 83-year-old woman,” daughter Maria Filice wrote in her statement.

Micieli died in hospital a month after being beaten and robbed in her own home.

According to an agreed statement of facts, Hamelin deceived her way into the Piazza Italia Seniors residence in the McCauley neighbourhood in July 2019.

At the time, she was facing almost two dozen break-and-enter charges related to seniors’ assisted-living residences. Hamelin was under 24-hour house arrest and ordered to stay away from seniors’ facilities.

After gaining entry that night, she proceeded to steal the wallet of another resident before entering Micieli’s suite.

Hamelin locked the elderly woman inside and assaulted her. Micieli suffered a fractured right hip, five broken ribs and bruises to the forehead, arms, and chest.

Because of the injuries, she developed worsening pneumonia.

Justice Sterling Sanderman said among the aggravating factors were Hamelin’s significant record and attempts to pin responsibility on others.

The victim’s vulnerability and the level of violence inflicted also played into the decision, Sanderman said.

“Your act on this night was a betrayal of this basic tenet that governs all of our lives: respect for the elderly.”

He called the theft of three gold rings — pulled off the victim’s fingers — “extremely craven behaviour.” The rings, including a wedding band and a family ring from Italy, were never recovered.

The sentence was in line with the ten years requested by the Crown prosecution but above the five-and-a-half to seven years suggested by defence lawyer George Isshak, making his first appearance in court for the case after Hamelin discharged her previous counsel.

Sanderman said the sentence would likely have been higher if not for a guilty plea in February and a Gladue report presented to the court Wednesday.

“You have had a life that I would not want to wish on anyone,” he told Hamelin.

The report chronicled a history of abuse at the hands of family and while in foster care. It said Hamelin has and continues to struggle with addictions.

Isshak said it should come as “no surprise” that she would end up where she did given her upbringing.

Her health issues, including bouts with pneumonia while at the remand, were also brought up during proceedings as potential mitigating factors, although Sanderman said there was no firm report that could provide an evidentiary basis beyond past difficulties and treatments.

Hamelin will have six months taken off her 10-year sentence for time in custody. Last June, she was sentenced to four years for five break-and-enter thefts at other seniors’ complexes. The manslaughter sentence is to be served consecutively.

In addition to imprisonment, Hamelin will have her DNA registered in a national databank, will be prohibited from possessing firearms for life once released, and cannot contact any members of Micieli’s family.