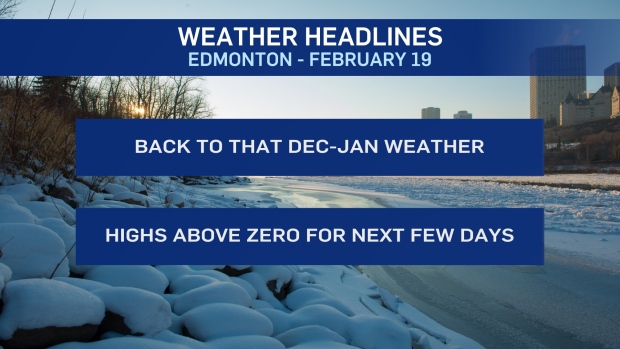 EDMONTON — Remember how warm it was through December and most of January?

If the recent deep freeze has erased any recollection of that, don’t worry…it’s coming back.

Temperatures were above zero SEVENTEEN days in December and another seventeen days in January.

Then, it started to cool off in late January.

Five of those days had highs below -20.

But, we’ve turned a corner in the past two days and we’re back to the ABOVE FREEZING temperatures for the next little while.

That melt/freeze cycle brings it’s on downsides and has it’s detractors. But, I think most people will prefer this to what we’ve just come through.

Mostly cloudy with some late-day sunny breaks and a high in the 1 or 2 degree range in Edmonton today.

Gusty conditions in the foothills will be the big weather story provincially.

And…again…there will be a big spread in temperatures from west to east.

Much of eastern AB gets highs in the -4 to -9 range while the west will be near or above zero.

I’m thinking wind will kick up in the Edmonton region on Saturday, especially in the afternoon.

West winds 20 gusting to around 40 km/h. Partly cloudy skies and a high of 2 or 3 degrees is likely.

Clouds increasing through Saturday evening and sticking around into at least the first parts of Sunday should hold temperatures up.

Sunday’s morning low is forecast to be in the -5 range.

Sunday afternoon is expected to be the warmest day of five to ten days with a high in the 4 to 8 degree range.

It stays warm even after Sunday. Daytime highs should be above average for the rest of the month.

Here’s the forecast for Edmonton:

Saturday – Partly cloudy through the day. Becoming cloudy in the evening and overnight.

Sunday – Mostly cloudy in the morning. Sunny breaks in the afternoon.

Light wind in the morning. Turning gusty later in the day.