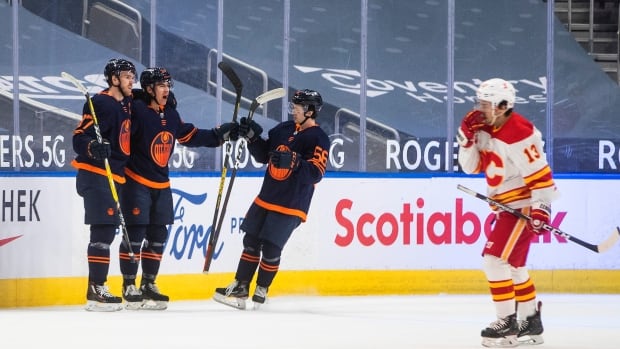 The Edmonton Oilers’ general manager, the NHL and others are rallying around defenceman Ethan Bear, who was the target of numerous racist online comments after his team was swept from the Stanley Cup playoffs Monday night.

“I feel sick for him,” Oilers GM Ken Holland said Wednesday. “I’m disappointed for him that he would get this kind of abuse. It’s unacceptable.”

Holland said Bear, 23, worked hard throughout the summer to earn his spot on the team — playing his second full NHL season — calling him an “unbelievable young man” and a “tremendous role model … especially in the Indigenous community.”

The Oilers lost Game 4 of their first-round playoff series against the Winnipeg Jets in triple overtime.

Bear was benched by head coach Dave Tippett after his turnover in the defensive zone led to the tying goal in the third period. He sat out for most of the overtime periods as well.

Ethan Bear represents both our game and his Indigenous heritage with dignity and pride. He, and all people from Indigenous backgrounds, deserve to feel empowered and respected on and off the ice. We stand with Ethan and his family in denouncing hate. <a href=”https://t.co/BQazdfjS1B”>pic.twitter.com/BQazdfjS1B</a>

Holland said a lot more work needs to be done to rid the sport of racism. He said he planned to talk to Bear on Wednesday about what happened. Bear has not yet commented.

Asked whether teams or the league should try to ban fans who make racist comments, Holland said: “I want to talk to our PR people to see what we can do as an organization to try and make sure this doesn’t happen in the future.”

Evan Taypotat, Bear’s uncle and chief of the Kahkewistahaw First Nation in Saskatchewan, said Bear will not give “anonymous trolls … a voice for their hatred.”

Others have stepped up to support Bear, who grew up on the Ohapowace Nation in Saskatchewan.

“Ethan Bear is a very good hockey player,” former Oilers captain Andrew Ference said on Twitter. “Lift him up and he will be an integral part of any success the Oilers have in the future.”

Ference said he has met Bear on several occasions and felt compelled to call the racism out.

“It’s outrageous that any of this happens,” he said in an interview. “I think even if it’s just a few people, it has a big impact. It only takes a couple of handfuls of those comments to completely destroy somebody.

The Confederacy of Treaty Six First Nations Chiefs also said it was appalled by the racist comments.

“Our First Nations people are avid fans of hockey and the Edmonton Oilers, and we are most proud of the athletic achievements of our people,” Grand Chief Vernon Watchmaker said in a statement. “Ethan has been a gracious ambassador to our youth, and he is very much a part of our communities.

Bear’s girlfriend, Lenasia Ned, posted a message of thanks and support on her personal Facebook page on Tuesday.

“[Ethan] appreciates the love and support from everyone and is thankful for you all,” she wrote.