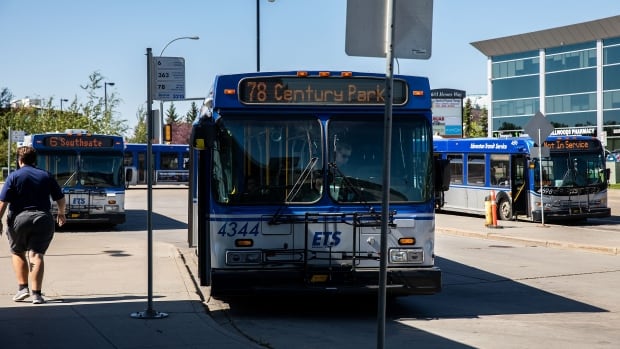 A citizen-led advisory board has developed key recommendations designed to make Edmonton’s transit system more inclusive and safe for riders and employees who are Black, Indigenous and people of colour.

The Edmonton Transit Service advisory board presented a report on “inclusive transit” Tuesday to city council’s urban planning committee. The report was received for information.

The board is calling for the city to bring in “BIPOC-friendly human resources practices,” including anti-racism training for staff, and having peace officers move away from fare-enforcement duties.

The recommendations include tracking data related to BIPOC experiences on transit and publicly declaring — using signs at ETS buses and centres — that racism and hate speech will not be tolerated.

The board decided to look into the experience of BIPOC transit riders and drivers following the Black Lives Matter protests in summer 2020, as well as after several attacks on racialized Muslim women at transit centres at the end of last year and beginning of 2021.

The report includes stories of riders and drivers who have dealt with racism, micro-aggressions and abuse.

“We heard first-hand stories of people changing their work schedules to ride on off-peak hours so they don’t have to deal with sort of small micro-aggressions of people, not allowing them to sit next to them,” advisory board member Jarret Esslinger told CBC Radio’s Edmonton AM.

Recommendations to make Edmonton transit safer and more welcoming for everybody 7:40

The report suggests the city consider hiring a director of anti-racism and inclusion, similar to what has been done by the Toronto Transit Commission.

The board says Edmonton should consider bringing the fines for fare evasion in line with parking fines. “The $250 fine for fare evasion is unnecessarily punitive and further punishes those who may not be able to pay their transit fare,” it says in the report.

The advisory board’s report found that from 2016 to 2020, an average 61.5 per cent of transit peace officers’ interactions were with individuals who identified as BIPOC.

Of those interactions, 86 per cent of all warnings were given to Indigenous people.

In 2019, data collected by Student Legal Services of Edmonton found that out of 5,879 tickets issued in 2018 for fare evasion, 6.4 per cent were given to people with “no fixed address.”

The 2016 homeless count found 51 per cent of individuals surveyed self-identified as Indigenous.

Lindsay Vanstone, interim chair of the advisory board, said the report’s key value is that it comes from a citizen perspective, “to help make Edmonton transit more, more inclusive, safe and respectful for BIPOC individuals.”