An Edmonton-based homeless advocate is set to arrive at the Alberta legislature Tuesday afternoon with a shopping cart and a message about Indigenous homelessness.

Vee Duncan set out from Calgary last Tuesday carrying the clothes on their back and some food and essentials in their shopping cart.

The two-spirit Secwepemc advocate from Williams Lake First Nation used the 300-kilometre trip to Edmonton to raise awareness about issues of homelessness and the struggle people face when transitioning out of jail.

“I’ve been homeless before and I’ve had to drag shopping carts. And I’ve had to do all of this while living on the streets. I just wanted to show solidarity and I also wanted to bring awareness to reconciliation,” Duncan said.

Duncan followed Highway 2A on their way to Edmonton, connecting with community organizations, friends and curious strangers along the way.

One of the most powerful moments of the trip was an encounter with a group of older Cree women in Maskwacis, who offered them tobacco and a donation, telling Duncan they were on the right path.

“I broke down crying. I couldn’t believe that people would support me in this way,” Duncan said.

“I’ve had friends come out and follow me. I’ve had some people come out and pull with me, walk along beside me … The support that I get from them, it’s just amazing.”

And while the “Pulling for Change” walk is a highly public event, it’s also a deeply personal journey. Duncan first moved to Alberta in 2007, in hopes of cashing in on the oil boom. But working construction jobs across the province, Duncan struggled with addictions and eventually found themselves in and out of provincial jails. 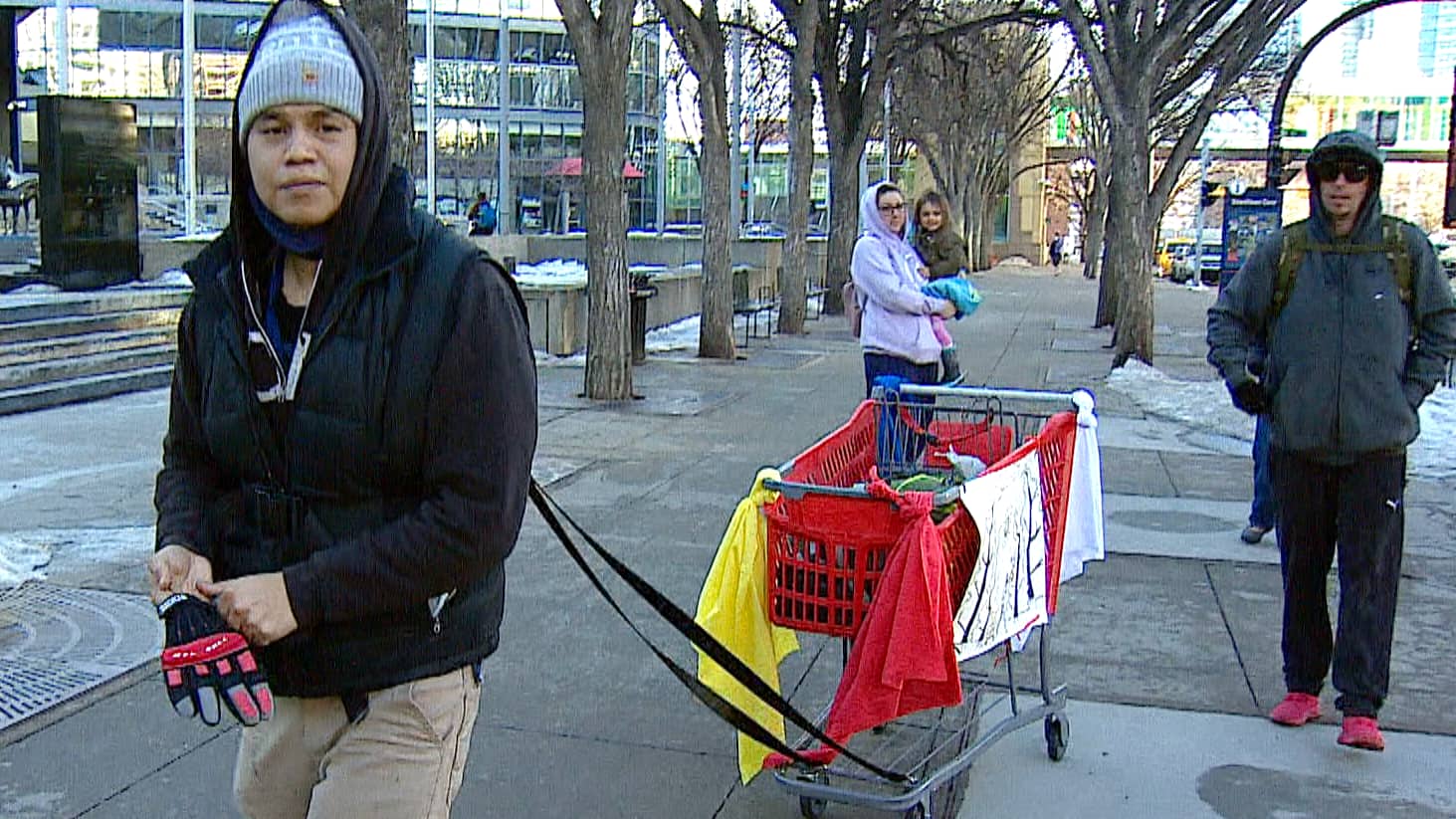 An Indigenous advocate is making a roughly 300-kilometre journey as a symbol of the daily struggle of homelessness. 0:54

Between jail stints, Duncan tried to seek treatment for unaddressed sexual abuse and addictions, they said. But Duncan says they struggled to find appropriate services, coming up against wait times or getting turned away because of their criminal record. In the past decade, they have been homeless in Edmonton, Calgary and Lethbridge.

“We need programs for people that are incarcerated to deal with trauma and to actually show people how to live,” Duncan said.

Canada’s prison watchdog has called the overrepresentation of Indigenous people in federal custody — about 30 per cent of inmates despite accounting for roughly 5 per cent of the population — a “national travesty”.

“There’s no push to change. You just go to jail, get out and you’re expected to be different,” Duncan said.

With the help of a Calgary social worker, Duncan was eventually accepted for treatment at a healing lodge in late 2018 before transferring to a centre in Sherwood Park this past August.

Now in Edmonton, they work with a team of other volunteers to do outreach about four to five nights a week with people sleeping rough in Edmonton. They bring food, blankets and other basic necessities to camps in the river valley, and are looking to team up with restaurants to help supply meals.

About 60 per cent of the people experiencing homelessness in Edmonton are Indigenous, according to the latest statistics from non-profit Homeward Trust.

Duncan also has plans for a non-profit in the works. They envision Nék̓em, meaning “to change something” in Secwepemctsin, will be a community hub where people who were previously incarcerated can access support groups and classes.

“I want to bring a solution,” they said.

“Asking for a better self because of my addiction and my upbringing, I’m relearning how to live properly, I don’t know how else to put it.”