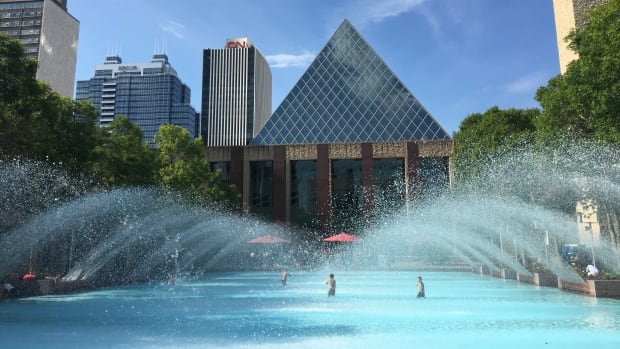 Edmonton will try to fill downtown streets again as the city starts to reopen businesses and workplaces shuttered by the COVID-19 pandemic.

The city has launched a new downtown vibrancy strategy, a short-term plan to spruce up public spaces and support festivals and groups in bringing back fun and entertaining events.

The city has set aside an initial investment of $5 million but it could take $7 million to $28 million to implement partnerships and initiatives, administration told the committee.

Coun. Tony Caterina supports the effort to get people off their screens and meeting face to face.

“We are all social beings and the attraction part of being together, I think that has to really be considered,” Caterina said during the meeting.

“Smell, taste, touch, all those things that would be attracting people to come downtown and to be together, I think is in line with the strategy that we’ve heard.”

A recent exclusive CBC poll found that many Edmonton residents wanted a bustling and energetic downtown.

When asked to rate the importance of a vibrant downtown core on a scale from zero to 10 (where zero means not at all important and 10 means very important), 57 per cent of the 900 respondents gave a high score of seven to 10, and another 31 per cent gave it a moderate score of four to six. Only 12 per cent give this a low score of zero to three.

Coun. Scott McKeen thinks it’s a good idea to establish the downtown area for a lot of visitors that haven’t been out much during the COVID-19 pandemic.

Claire St. Aubin, a principal planner with the city, outlined the strategy’s four sections: Downtown as a home, an economic hub, a destination and a safe and welcoming place.

“What makes downtown a destination also grows business, and a safe and welcoming downtown is a place people want to call home,” St. Aubin told the committee.

The projects will require partners.

The strategy lists several groups it can work with, including post secondary institutions, libraries, the Edmonton Chamber of Commerce, the Downtown Business Association, the Arts District and the city’s tourism and convention centre entity, Edmonton Global.

As a destination, the strategy suggests creating a “downtown is for everyone” campaign and aligning promotional materials among partnering organizations.

Downtown as home, for example, includes possible public space amenities like pop-up playgrounds and closing roads on a regular basis for pop-up or ongoing events.

McKeen supports enhancing the downtown as a neighbourhood as well as an attractive place for visitors.

“A neighbourhood where people come to work during the day and people come hopefully to play and dine and shop evenings and weekends,” McKeen said. “It will also have places for families and places for kids.”

McKeen said he’d like to see people enjoy spaces like the fountain in front of city hall, and festivals like Taste of Edmonton and the Works.

Like many downtowns, the city has taken a hit during COVID-19.

Jeff Chase, manager of economic investment services, said he calculates about 60,000 city workers and 35,000 students stayed home during the pandemic.

Downtown residents and business owners contribute nine per cent to the city’s property taxes, and occupy one per cent of the city’s area, Chase said.

“You don’t really feel like there’s a reason to come here if half the businesses are closed for lunch because there’s not enough of a critical mass, McBryan said. “People are avoiding downtown right now just because when there’s no one here, it does feel a little bit unsafe.”

The strategy builds on the work the city has done during COVID-19, like shared streets initiatives, patio permits, economic recovery and downtown construction grants, and events like Downtown Spark.

CBC News’ random survey of 900 City of Edmonton residents was conducted between March 29 and April 14, 2021 by Edmonton-based Trend Research under the direction of Janet Brown Opinion Research. The margin of error is +/-3.3 percentage points, 19 times out of 20. For subsets, the margin of error is larger. The survey used a hybrid methodology that involved contacting survey respondents by telephone and giving them the option of completing the survey at that time, at another more convenient time, or receiving an email link and completing the survey online.