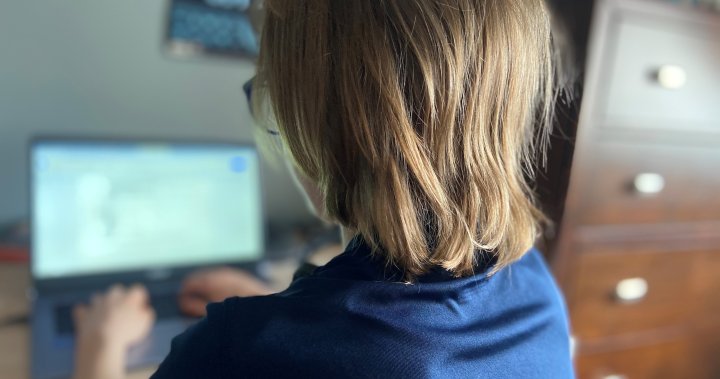 Police and those who have made it their mission to protect children behind the screens are warning parents about a spike in online sexual abuse.

Since the COVID-19 pandemic began, there have been record-breaking reports of sextortion and online sexual exploitation.

“We put all sorts of rules and regulations in place in the offline world and we’ve completely decided somehow to abandon children online,” said Signy Arnason, associate executive director for the Canadian Centre for Child Protection.

“You don’t need your kids to leave home for them to be horrifically exploited and abused.”

The Canadian Centre for Child Protection, or C3P, runs the national tip-line Cybertip.ca.

With more young people spending more time online over the past year, there has been an 88 per cent increase in reports to Cybertip.ca — many of those reports have involved predators connecting with youth through social media and live stream platforms like Snapchat, Google Hangouts, Facebook Messenger and Omegle.

Omegle is a free online chat room that allows you to connect via text or video with strangers.

Sgt. Kerry Shima with the northern Alberta Internet Child Exploitation (ICE) unit was so concerned about the website he sent out a warning on Twitter.

I repeat: *OMEGLE IS NOT SAFE FOR KIDS*

Kids are finding their way to this site and getting lured into sending pictures and videos to predators. We get this Every. Single. Day. pic.twitter.com/465rrnJmtP

Shima stressed gaming platforms are prime for predators and young people are being victimized.

“We’ve seen a substantial increase in child luring cases over the past year, even into this year,” Shima said.

“There are a lot of cases where kids are being lured into sending sexualized pictures and video of themselves.”

Shima added in Alberta alone, internet child exploitation investigations have gone up 50 per cent since 2019.

He recommended parents download the apps their children are using and try the video games themselves.

C3P also said parents need to have a vested interest in the online world because of the harm happening to children, but Arnason said parents have been left to fight this battle on their own.

“I think we’ve unfairly placed the burden on parents to figure this thing out,” said a frustrated Arnason, “and quite frankly, it’s a little bit ridiculous.

“You cannot stay on top of everything your kid is doing online.

“Companies bear an enormous responsibility for what needs to change here and so do governments. So we need to be demanding more.”

Arnason said online companies that have made billions in profits should be regulated. In the past, jurisdictional issues have allowed those companies to skirt responsibility, she said.

She pointed out two sides of the online sexual exploitation issue.

The first, sexually abused children with images typically recorded by family or a friend of the family — then uploaded to the internet.

Since 2018, C3P and the National Centre for Missing and Exploited Children (NCMEC) have been working with a group of child sexual abuse survivors, known as the Phoenix 11.

The Phoenix 11 had their child abuse recorded and distributed online.

One year ago the group was in Washington, D.C. and pleaded with White House officials and the tech industry to get rid of images and content on their platforms that exposed the “most horrific moments of our lives.”

A set of voluntary principles was released that prioritized child safety and protected survivors. C3P said a number of companies pledged their support, including Facebook, Google, Microsoft, Twitter and Roblox.

“One year ago, industry pledged to do better and we are still waiting,” said a statement from from C3P.

The other issue, said Arnason, has been adolescents lured or threatened to join live chats and then recorded without their consent. Videos and pictures have ended up on adult pornography sites.

“It’s just not good enough anymore and we’re seeing the devastating impacts. So we all need to be kind of screaming from the rooftops that things need to change.”

Shima said there are no doubt a lot of cases that have gone unreported over the past year — with the victim and parents trying to manage the situation on their own. He stressed it was important to come forward to police.

“It can help not only their family,” said Shima, “but it can also help other investigations.”

There is also a reporting tool on Cybertip.ca and steps to take if a youth is being sextorted.