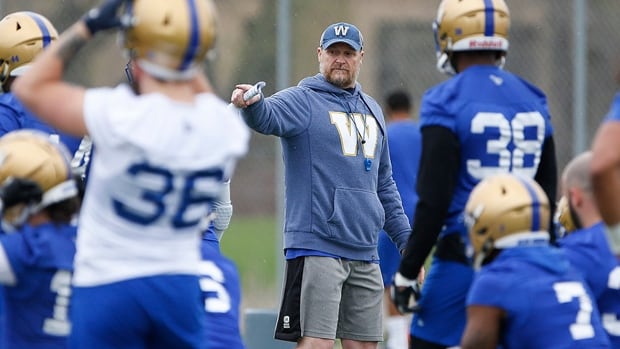 CFL players continued practising Tuesday after turning down the latest contract offer from the league.

On Monday night, the players rejected ratifying a tentative agreement that had been reached by the CFL and CFL Players’ Association.

In a memo to the CFL Players’ Association membership late Monday night, the union wrote there wasn’t enough support from players on the contract.

“There is currently not enough support from the CFLPA membership to ratify the most recent offer from the CFL,” the memo stated. “The CFLPA has communicated with the league that a new memorandum of understanding (MOU) can be achieved if the league is prepared to resolve the outstanding issues quickly.

“In reviewing and discussing the offer, all CFLPA members maintained to the bargaining committee that, while many components of the current offer align with the direction that’s been provided by the membership, there remain critical outstanding items that must still be resolved in order to achieve a fair deal.”

The Grey Cup-champion Winnipeg Blue Bombers are planning to hold practice as usual Tuesday with the expectation players will attend, based upon communication with the club’s PA reps.

And Hamilton Tiger-Cats linebacker Simoni Lawrence suggested on social media he’ll be back at it Tuesday as well.

“I’m at work tommro!” he wrote on Twitter Monday night.

I’m boiling right now I can’t even sleep. Over 30% of members didn’t even vote!

The two sides are expected to meet informally Tuesday, with a source saying the CFL had already tabled a new offer to the players that reportedly included a boost in the salary cap along with a ratification bonus.

The bonus is something that’s pretty standard in collective bargaining but it still must be collectively bargained.

Time is of the essence as the CFL exhibition schedule is slated to open Friday night.

The bonus was one reason for the players’ rejection of the tentative deal but at the crux of their decision was the CFL wanting to increase the number of Canadian starters from seven to eight.

But that would include a nationalized Canadian, an American who has spent either five years in the CFL or at least three with the same team.

In addition, three other nationalized Canadians could play up to 49 per cent of all snaps on either side of the ball.

Let’s be clear it’s all about the Ratio! They want us to go on strike together to hurt American players that choose to make there football team and community a priority which also creates same team continuity. So fans can feel safe getting there favorite players jersey 1/2

The timing of the rejection was somewhat surprising given one team — the Edmonton Elks, according to another source — hadn’t completed voting on the deal. That was supposed to happen later Monday evening.

The CFL and CFLPA reached a tentative seven-year agreement Wednesday, four days after players with seven of the league’s nine teams went on strike.

It marked just the second work stoppage in league history and first since 1974.

The union had recommended acceptance of the seven-year agreement to its membership, which featured increases to the CFL salary cap ($100,000 annually starting next year) and minimum salary (from $65,000 to $75,000 by 2027). It also included a revenue-sharing formula for the union and gave players a chance to have the final year of their contracts guaranteed up to 50 per cent.

And while the CBA called for a return to padded practices — one hour weekly during the regular season to a maximum of 12 — it extended medical coverage for retired players to five years from three.

The regular season is slated to start June 9.

“The entire CFLPA membership has indicated a strong desire to come to a fair agreement as soon as possible to that players can work and fans and partners can bet back to celebrating the game,” the union memo said. “With that, the CFLPA bargaining committee has already informed the CFL which items within the package still need further negotiation in order to satisfy the membership and keep discussions moving forward as efficiently as possible.”

Earlier Monday, before the news the CBA had been rejected, CFLPA executive member Henoc Muamba said while the tentative deal had his support, if it wasn’t good enough for a majority of union members, he’d be prepared to return to the bargaining table on their behalf.

“Being a team rep and [union] vice-president as well, I try to have a good feel for the room,” Muamba said. “The last few days I’ve had many great conversations with a bunch of guys.

Muamba joined the CFLPA hierarchy in Montreal on Friday to discuss the deal with players. Muamba is not only a former Alouette but also speaks both officials languages.

The visit came after Canadian linebacker Chris Ackie, an Alouettes player rep, suggested the agreement could be rejected.

Toronto was one of the seven teams that began training camp Thursday — Edmonton and Calgary reported for the May 15 start because they weren’t in a legal strike position then. Before news that the deal had been rejected, Muamba said if that was indeed the case, the union would try kick-starting contract talks buoyed by the knowledge it’s what most of the membership wants.

“I think the committee will be more comfortable to push further knowing they have the strength and confidence of the membership behind them,” he said.