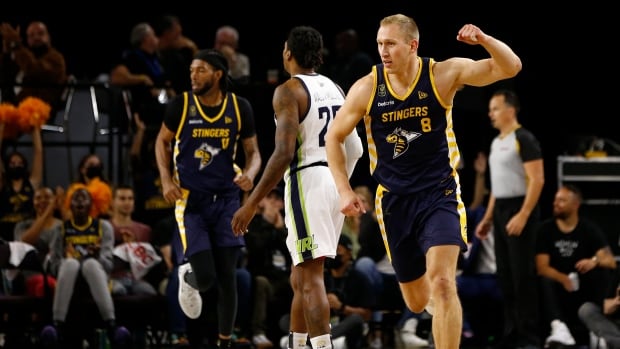 The Edmonton Stingers bounced back from their season-opening loss in a big way, defeating the Saskatchewan Rattlers 84-71 on Sunday in Edmonton.

Only needing to score 82 points to win and up 80-71, a technical foul by Rattlers guard Scottie Lindsey put the Stingers’ Adika Peter-McNeilly on the free throw line to pad the lead by one.

On the following possession, Edmonton forward David Pekarek hit a three-pointer to seal the victory.

Forward Brody Clarke led the way for the Stingers with 22 points, in addition to a strong all-around effort from Jordan Baker who recorded 11 points, 15 rebounds and 7 assists.

Lindsey led all scorers with 24 points, while forward Tony Carr and guard Devante Bandoo pitched in 19 and 14 points for Saskatchewan, respectively.

The opening frame was tight for much of the start, with the largest lead being six for the Rattlers, who closed the quarter on a 7-2 run after being down 9-8 through the first six minutes of the game.

In the second, Edmonton returned fire, starting out the quarter on a 7-0 run before Saskatchewan called a timeout after scoring just one point. A 9-3 run for the Stingers, with Clarke scoring four of the points, pushed the lead to 27-19 — the largest lead of the game up to that point.

Minutes later while trailing 30-22, the Rattlers were able to deliver another strong finish to a quarter, closing the half on a 13-5 run to go into the break tied 35-35.

The Stingers were again able to push the lead to eight in the third, going up 50-42, with Baker scoring six of the team’s first 15 points of the quarter.

Saskatchewan was slowly able to close the gap as the frame progressed but were unable to regain the lead or tie the game up going into the final period.

In the fourth, the Rattlers continued their push, eventually being able to take the lead behind a Lindsey three to go up 69-68. A Jahmal Jones layup put the Stingers back up one on the next possession, before Lindsey scored a layup to put them up one.

Pekarek scored a three to put the Stingers up 73-71 going into the Elam Ending, where the Rattlers ran out of any offensive steam to keep up with Edmonton.