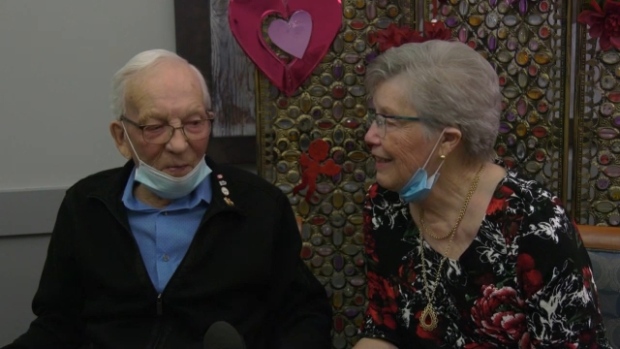 EDMONTON — An Alberta husband and wife are marking more than seven decades together this Valentine’s Day.

Leo and Henriette Lavardiere met in the francophone community of Falher, Alta. a few years after the end of the Second World War.

“In those days, going out, it wasn’t easy because gas was rationed. And, most farmers had only one vehicle,” Henriette said.

The pair found love on the softball diamond during the usual, and popular, weekend games, but Henriette remembers it wasn’t a case of love at first sight.

“In those days, I didn’t look at him as a future husband,” she said.

Henriette was a decade younger than her future husband. Leo is now 96 years old but still remembers those early days.

“I remember she was tiny,” he said of his future wife. “She weighed 100 pounds. Very cute”

“My life turned out not too bad,” said Leo. “Better than I expected it to be.”

After all those years together, the couple says they remain in love.

“After 70 years with the same person, we know all the tricks of the trade,” said Henriette.

Tricks she says include simple daily gestures of affection.

“Every night our last kiss and I tell him ‘I love you very much,'” said Henriette. “Don’t go to bed mad at each other.”

The couple live a seniors home in Devon and say caring for each other remains at the centre of their relationship.

“Compassion, caring and to be concerned about each other,” said Henriette. “Loving is many things.”

With files from Ziyah Karmali