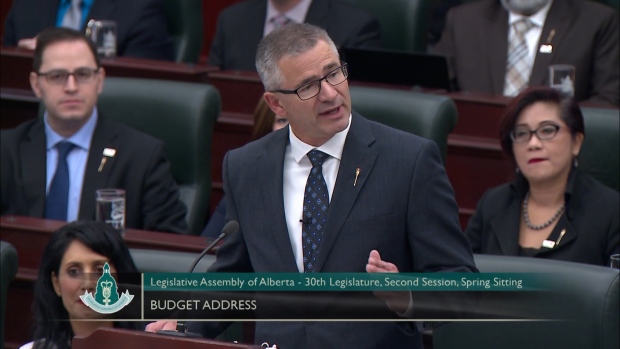 EDMONTON — Jason Kenney’s government delivered its second budget on Thursday that, like the previous year’s fiscal plan, emphasizes job creation efforts while holding spending on the public sector including health and education.

“This budget continues the responsible four-year fiscal plan that started with Budget 2019, a plan to get Albertans working, to make life better and the pledge to boldly stand up for Alberta,” said Finance Minister Travis Toews.

The plan continues to emphasize the province’s energy industry as well as its Fair Deal Panel and calling on Ottawa to implement a retroactive $2.4 billion fiscal stabilization payment.

“I call on our federal government to unequivocally and tangibly support growth in the Canadian energy industry and our fair request for a retroactive fiscal stabilization payment,” said Toews.

The tax on vaping products that was promised in Budget 2019 is also a part of the new fiscal plan.

Budget 2020 details a $1.2 billion decrease in the provincial deficit to $6.8 billion, though total revenue is $1 billion lower than the government’s last budget.

Alberta’s taxpayer supported debt sits at slightly under $77 billion but the government still projects to balance the budget by 2022-23.

All of that means $35 million fewer taxpayer dollars will be spent on debt-servicing costs.

“A balanced budget means that millions — and then billions — of dollars in interest payment to bankers and bondholders can be diverted to the services Albertans need,” said Toews.

The province’s new jobs plan relies on the already announced annual reduction in the corporate income tax, now down to 10 per cent and decreasing by one per cent each year for two more years.

“Government’s best role is to offer a predictable and competitive environment that allows the private sector to thrive,” reads the government’s fiscal plan.

The plan places a new emphasis on agriculture jobs with 2,000 new positions in canola processing, the pork industry and food processing, leading to an annual eight per cent growth in the sector.

The plan “seeks to attract $1.4 billion in investment to grow agriculture and food exports over the next four years.”

The province is promising to put people to work by accelerating the reclamation of “legacy sites” including orphan wells.

“This investment is expected to create hundreds of jobs in regions where they’re badly needed, and result in a significant increase in the reclamation of abandoned sites,” reads the fiscal plan.

The budget also says “thousands of available jobs” in the transportation industry and is pledging to make class 1 truck driver licences easier to obtain.

The province says it continues to focus on getting Alberta to oil to market.

As in Budget 2019, the government is still counting on two of Line 3, Keystone and TransMountain pipelines to be built.

Until then, it’s counting on increased crude shipments by rail with the government expecting rail shipments to exceed 500,000 barrels per day “in the near term.”

“Alberta’s energy sector is poised to meet this growing demand,” reads the budget.

The province is also promising to develop “a mineral strategy to diversify the sector,” but few details were contained in government documents.

Notably, the budget doesn’t contain any details on where or how much the province plans to directly invest in Alberta energy projects following the premier’s comments earlier this week that his government was ready to do so.

Government staff say that announcement will come at a later date.

The government continues to press Ottawa for a “fair deal” with a host of demands including a reform of federal fiscal arrangements and stronger support of the provincial energy industry.

“A federal system that recognizes the role of provinces and provides appropriate incentives for economic development and expenditure restraint is fundamental,” reads budget documents.

“It is time to review the system of fiscal federalism to ensure it delivers fair and stable revenue to Alberta and it positions the province to meet future challenges.”

Specifically, Alberta is seeking to lift the cap on the Fiscal Stabilization Program that could see the province receive a $2.4 billion rebate.

The budget also asks Ottawa to use its “federal tax instruments” to further increase job creation and also support for the liquefied natural gas industry.

Health spending remains at $20.6 billion for 2020-21, with the same $100 million in funding for mental health and addictions, $40 million for opioid response and $20 million for palliative care.

A recent Alberta Health Services (AHS) review by Ernst & Young identified 57 changes with the potential to save between $1.5 billion and $1.9 billion annually.

“Every dollar we save will be put right back into the heath system to deliver on our promise to improve access and make the system work better for patients,” Alberta Health Minister Tyler Shandro said when the review was released.

Shandro has also said his main concern is to reduce surgery wait times. AHS will introduce its Alberta Surgical Wait-Times Initiative with the goal to perform an extra 80,000 surgeries over the next three years with the help of independent providers. Currently there are about 293,000 surgeries in Alberta each year, with 85 per cent performed in a hospital.

Physician funding will stay at $5.4 billion — 25 per cent of the health budget — after the province and the Alberta Medical Association did not reach a deal. The government said the new physician framework, which mainly set out to shorten consultations, will prevent cost increases of about $2 billion.

K-12 education funding will increase by $100 million to $8.3 billion through the jurisdiction’s own-source revenue.

Last week, the province announced it would move away from a per-student funding model to a weighted, three-year average. The number of grants was reduced from 36 to 15, but the province said school districts would see more funding under the new plan.

A lack in increased funding could stire more labour battles with health and education unions.

The Alberta government wants to double tourism spending to $20 billion by 2030 as a tool to attract investment and create jobs.

The 10-year strategy, part of the province’s jobs blueprint, will look to increase tourism dollars through a review and enhancement of Travel Alberta, promoting the province as a “desirable destination to live, work, play, invest and learn,” and the removal of red-tape that impairs the industry, the fiscal plan read.

Previously announced in Budget 2019, the government is moving forward with a four per cent-tourism levy for short-term rentals, such as Airbnb properties, “in order to level the playing field among temporary accommodation providers in Alberta.”

The province is introducing a 20 per cent tax on vaping products “to discourage youth from buying these products,” the fiscal plan reads.

The tax will apply to vaping liquids, as well as cannabis liquids, and vaping devices.

“Making all vaping products more expensive is an effective way to discourage youth use, as youth are more responsive to higher prices.”