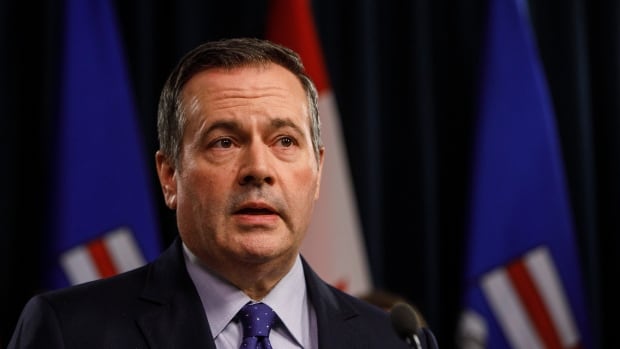 The Alberta government is making an additional $10,000 available to small- and medium-sized businesses that have seen severe revenue drops because of the COVID-19 pandemic.

Premier Jason Kenney and Jobs, Economy and Innovation Minister Doug Schweitzer announced Wednesday afternoon that $120 million is being set aside to supplement existing supports for enterprises.

Businesses that show a 60 per cent reduction in revenue will be eligible to be granted 15 per cent of their typical monthly income, up to a maximum of $10,000. Applications for a piece of that funding will open in April.

The support is available to companies with fewer than 500 employees and does not need to be repaid. The province says the money can be used for things like covering the cost of personal protective equipment, paying rent or staff salaries.

Initially the government offered two payments totalling up to $20,000 for small businesses that saw revenue drops because of the effects of public health orders: $5,000 for those shut down in the spring and $15,000 for those affected in the late fall.

The new $10,000 means up to $30,000 is available for businesses that meet the criteria. This infusion will replace the existing enterprise relaunch grant when its application period closes at the end of March — the grant that made the $20,000 available.

“We know that many Alberta small businesses and job creators will still need help for the foreseeable future,” Kenney said on Wednesday.

“Until we get enough vaccines from the federal government and we’re able to move forward safely, Alberta’s government will be there for those businesses and their employees, every step of the way.”

He said he recognizes the impact restrictions have on businesses.

“That’s why, since Day 1 of the pandemic … Alberta’s government has regarded restrictions as a last and limited resort,” he said. “It’s also why we’ve never imposed a lockdown on our province.”

Annie Dormuth, the Alberta director of provincial affairs of the Canadian Federation of Independent Business, says while any support is welcome, this new program will be inefficient.

“It’s really a bit mind boggling why the Alberta government is asking these hard hit small businesses to wait until April just for when they can apply,” she told CBC News.

Dormuth said the relaunch grant has been a success for businesses, but the current provincial supports aren’t proportionate to their suffering. The CFIB reports that 57 per cent of hospitality businesses and 44 per cent in arts and recreation say they are actively considering closing.

“Small businesses are still hanging on by a very thin thread right now and they do need additional support and they need it now.”

The province says this extra funding is supposed to fill in gaps not covered by federal COVID benefits. Businesses will be required to report the amount of provincial and federal support they receive, which is not to exceed 80 per cent of revenue.

Alberta has already provided $359 million to about 50,000 businesses in the province through the Small and Medium Enterprise Relaunch Grant. Applications are still open for another month and the ministry anticipates the $500 million set aside will be fully maxed out.

The government recently made adjustments to aid programs that allow new businesses started during the pandemic to apply for the relaunch grant.

Schweitzer’s office said around 10,000 new businesses opened in the province last year. Smaller enterprises in Alberta account for almost 55 per cent of employment in the province.

Bilous says small businesses are hurting and they need more support, not less.

“Today’s announcement is yet another smoke-and-mirrors trick to try to convince Albertans that they’re actually helping owners and their employees during the difficult COVID-19 pandemic,” reads the statement.

The NDP says businesses will now need to prove a 60 per cent loss in revenue, which is up from the previous 30 per cent threshold.

“They should extend their existing grant at least until the pandemic is over. And they should provide additional help to small businesses for rent, insurance, a ban on evictions and utility shutoffs, and a cap on food delivery app fees.”