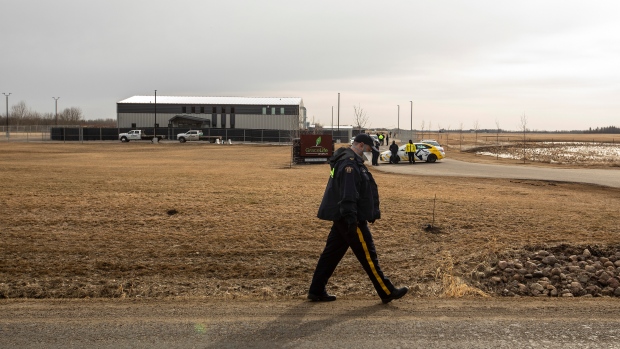 The documents cover 18 inspections performed between July 10, 2020, and April 7, 2021, and were obtained from AHS via freedom of information requests.

“The Pastor communicated to RCMP that he believes the pandemic is not going away, it’s been ten months and they need to follow God,” according to an inspector’s notes during a Dec. 20 visit.

“Pastor said Dr. Deena Hinshaw is a dictator and the Premier is hiding behind her.”

The records redact names, and refer only to job roles.

While GraceLife has more than one pastor listed on its website, many of the interactions have been detailed in prior court appearances as involving James Coates, listed on the church’s website as its pastor-teacher.

Later on Dec. 20, according to the documents, the pastor pointed out to the congregation that RCMP were there for the service.

“To show their appreciation for them … attendees stood up, clapped and cheered (leading to potential spread of disease),” the inspector’s report notes.

Coates was ticketed later the same day under the Public Health Act.

The inspector was typically accompanied by at least one RCMP officer while visiting the church, usually on Sundays.

They were often greeted by members of the church and entered the building after being told they didn’t have permission to go in but weren’t going to be stopped either.

“Pastor … communicated to the group that he doesn’t like the attention they have been receiving lately, but they have taken a stand,” reads one inspection report.

The inspector found numerous public health issues including a person acting as a greeter who was typically stationed at the church’s double-doors.

“He was seen touching and shaking hands with people as they entered,” according to notes from a March 14 inspection.

“[The inspector] assumes they aren’t all from the same household.”

The inspector and RCMP estimated church attendance reached as high as an estimated 375 people on April 4, far in excess of allowed guidelines as well as the church’s 15 per cent capacity of 92 people.

They also noted the church’s live band was performing without masks or maintaining distance.

“Singing is a high risk activity and all people in the band must wear a face mask if they wish to sing, the rest of the public is not recommended to sing along.”

Public health issues were also observed at the church’s Sunday school, where Mounties and an inspector reported “many youth sitting facing each other across a table, and not wearing face masks.”

“Upstairs in the library area there were tables set up in a square format with about 15 unmasked people sitting down and some within two metres of each other,” reads the notes from a Jan. 10 inspection.

The inspection reports also describe how, on several occasions, the inspector and Mounties were confronted inside or outside the church, with those interactions often being video recorded with cell phones.

Following a Jan. 10 visit by a public health inspector and resident physician, a church elder asked if they could pray for the two visitors.

Some confrontations didn’t involve church staff and weren’t as benign.

On March 14, Mounties and a health inspector were outside the church in their vehicles when a man approached and began recording them on video.

“He was yelling at RCMP calling them criminal and Nazis and telling them to leave the area,” read the inspection notes.

On April 2, a similar incident happened where “a person approached RCMP car and was saying that AHS go to hell for not doing anything about this and the government doesn’t give a damn,” according to the inspector’s notes.

Two days later, “a van with posters ‘no crime here’ and ‘end the tyranny now’ parked by the RCMP car,” according to April 4 inspection notes.

The inspector noted church representatives asked the driver to leave before he parked the van further down the road.

AHS eventually closed and fenced off the church on April 7, sparking protests and driving Coates and his church to hold services in a secret location.

Coates was initially jailed in mid-February and remained there until March 22 after refusing to abide by conditions of release, which included not holding church services that violated rules over gathering and masking. He was also fined $1,500.

Coates and his congregation have continued to meet in secret locations away from the church building. Videos of the services are posted to the church’s YouTube channel.

Coates is currently in the midst of a trial in Alberta Provincial Court for his Dec. 20 ticket.

The hearing was scheduled for three days and was held May 3 and 4 but adjourned until June 7 when it is scheduled to resume in Stony Plain Provincial Court.