Ken Holland didn’t exactly say he regrets not putting Jay Woodcroft behind the Oilers bench sooner, but he’s sure happy “Woody” is there now.

The Oilers GM spoke glowingly about his new coach Monday, as Edmonton prepares to take on the Colorado Avalanche Tuesday night in Game 1 of the Western Conference Finals.

“I don’t know if we’d be here if it wasn’t for the impact that Woody has had on our team. Certainly a lot of our players have played at a high level, but our team has really responded to Woody,” Holland told reporters in his first press conference since March.

Woodcroft has only held the top coaching job for about four months, but he’s not a new face around the rink, having served in the organization for seven years.

Originally hired in 2015 as an assistant to then-head-coach Todd McLellan, Woodcroft was relieved of those duties during a shakeup in 2018. But instead of leaving the organization, he agreed to run the bench of the Oilers’ AHL affiliate in Bakersfield.

“I watched over the last three years the job that he’s done developing our players down there. He turned that into a winning program,” Holland said.

When McLellan was fired in November 2018, Holland told Woodcroft he didn’t get the job.

“I said I wanted to bring in a veteran coach at the time. I brought in Dave Tippett and Woody expressed to me his desires to grow into an NHL coach,” Holland recalls.

When Tippett was fired in February, Holland said hiring “Woody” was a “gut decision.” 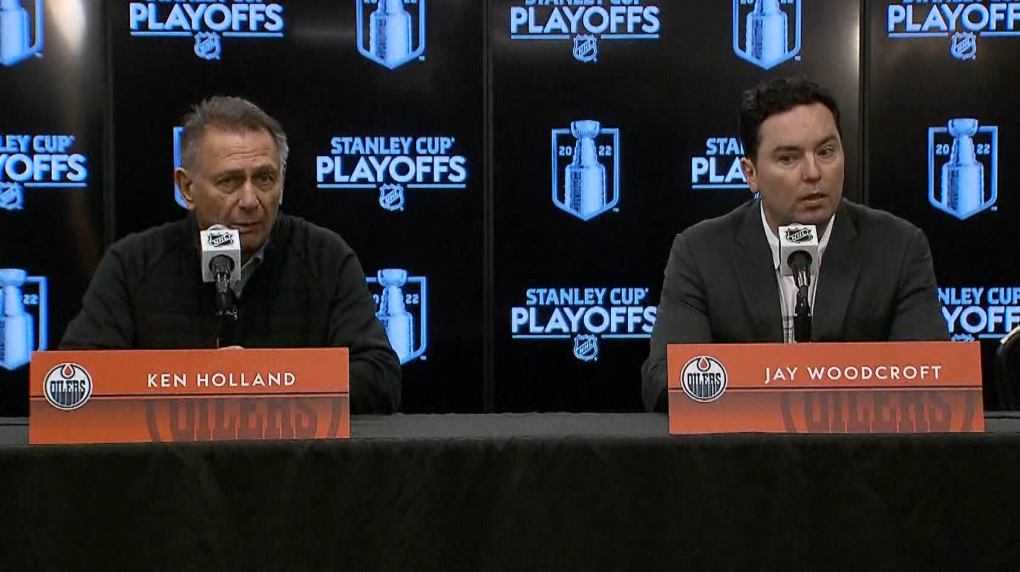 “We wanted to make sure that everyone had a clean slate. We were very clear in our communication of what our expectations were,” Woodcroft said of taking over.

He helped pull the Oilers out of mid-season slump and followed that up with playoff victories over L.A. and Calgary, pushing the team to heights not achieved in Edmonton since 2006.

SMITH ON A ‘HOMETOWN DISCOUNT’

Holland also gave credit for the team’s run to 40-year-old Mike Smith, and said he’s happy the goalie has another year left on his contract.

“I think it’s kind of a hometown discount when you look at the (salary cap) number, $2.2 million,” Holland said.

Despite a “nagging injury” leading to some struggles for Smith early in the season, Holland stated he was “never worried” about him regaining the form he showed a year before, when Smith won 28 regular season games and lost just eight.

“When he plays, he plays at a high level for us. He brings swagger, he brings confidence to our group. I think he’s the best puck-handling goalie of his era. He helps out our defence big time, and it was just a matter of getting him healthy,” Holland said.

The GM referenced the Oilers, and superstars Connor McDavid and Leon Draisaitl, “learning from disappointments” as helping to now achieve new playoff heights.

Game 1 of the Western Conference Finals will be played in Denver on Tuesday at 6 p.m. MT.