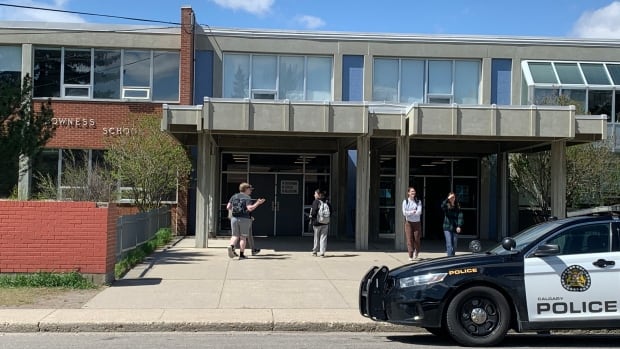 A student was arrested at Bowness High School on Wednesday after reportedly bringing a gun to school.

Calgary police say they were called to the high school in northwest Calgary just before 10 a.m. after reports of a student in possession of a gun. Officers went to the school and took one student into custody and recovered a firearm.

In a letter home to parents and guardians, principal Jana Macdonald said administration assisted police in an “emerging investigation.”

“The event did occur during school hours, thus several students were aware of a significant police presence,” she said.

“The police acted quickly and at no time were classes disrupted. Please know that we cannot share details about the investigation at this time.… We take our commitment to student safety very seriously.”

Macdonald told families that the CBE has established a process for schools to follow during incidents such as this, and those processes were followed.

One Grade 10 student CBC News spoke with said students were aware of the situation and it put a few people on edge.

“I feel like there should have been a lockdown for a while.… They didn’t tell us that like it was an actual firearm in our school, and I don’t know what his intentions were but it was kind of freaky and it wasn’t the most fantastic experience,” he said.

The student said he heard the student who was arrested was allegedly “showing off” the firearm in the bathroom that morning.

“A lot of people knew he had it, but I’m not quite sure who told anybody,” he said.

“I don’t really think he was going to do anything with the gun,” she said. “I think he probably just had it for attention.”

Police are asking anyone with information to contact authorities.