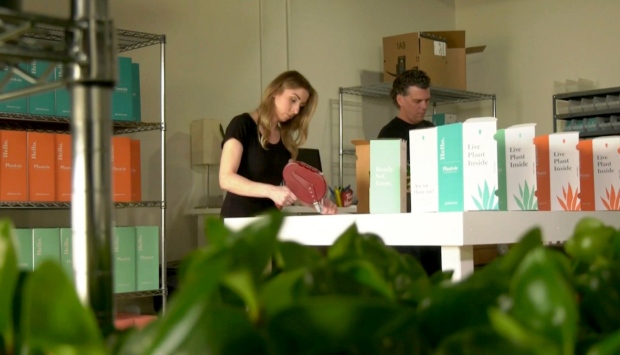 CALGARY — When public health measures were brought in to slow the spread of COVID-19 in Alberta, keeping many businesses closed and forcing people to stay at home, Jeff Bradshaw and Jamie Starchuk say a seed was planted.

What grew out of that idea is the pair’s pandemic project-turned-business — Plantsie.

“A Plantsie is a plant with personality and when we started the company, we wanted to create a fun, fresh, modern twist on indoor potted house plants” said Starchuk, a co-founder of the company.

Bradshaw admits it’s a challenge to start a business in Calgary in the middle of a pandemic but he sees it as an opportunity to grow during a time when he would’ve otherwise been struggling to line up clients at his other job.

“Our background is in film and video production and last year when the market dipped, we thought we could sit around and complain or we could actually start doing something with it,” he said.

Plantsie is starting online, allowing people to browse, shop and ship plants to their door.

“What we’re doing here is taking something fairly traditional, like plants, and bringing it to a high-tech business, really,” said Bradshaw.

The move to teleworking caused by the pandemic has also kickstarted growth for Athennian, a Calgary legal technology company that has more than quadrupled its workforce in the last 14 months.

“About a year ago we were 14 people working out of a yoga studio under Crowchild Trail,” said Josh Malate, the COO of Athennian.

“Where we are today, we have a newer office, but we’re also 75 people strong. By the end of the year, we’ll probably double that.”

The legal industry is “archaic” in the way in which files are typically collected and managed, Malate says, and the move to digitize paper files was already slowly happening.

But the pandemic sped that up.

“This train is already going and it’s just going to continue,” he said.

The company recently had its Series A financing boosted to $17 million this year, the latest in a trend that has seen Calgary tech companies raise big.

Malate says Calgary’s tech industry is in good shape to grow, despite the challenges created by COVID-19. He says the city’s high quality of life and relatively low cost of living makes it attractive for talent, especially in the legal tech space.

“There is an incredible legal profession here in Calgary that existed because of (the oil and gas) industry,” Malate says. “We’re really leveraging that.”