It sat by his kitchen phone, yellowing with age.

Dubyk had written down the numbers of local authorities after his father died, but he couldn’t bring himself to call, to say he planned to burn down the century-old grain elevator outside his family’s little blue farm house that three generations of his family had shared near Rosetown.

Dubyk wanted to conserve and restore the building, but high costs and roadblocks made that impossible. Saying goodbye by setting the tower ablaze was the last thing he wanted to do, but eventually he realized there was no other option and he made the call.

“There was just nothing else we could really do,” he said.

On an April morning in 2017, Dubyk piled fuel at the base of the elevator and the small office beside it. He touched a lit rag to each and hurried back a safe distance. He checked the time: 8 a.m.

A few gathered neighbours watched the first sparks with him. They were old friends, veterans of working nearby fields and longtime residents of Rosetown.

Dubyk huddled behind a video recorder, capturing the flames as they engulfed the building where he had worked with his grandfather. The fires spread and the tower teetered before pancaking downward into a smouldering pile that smoked for weeks.

Numbers ‘declined tremendously’ since the 1950s

Wooden grain elevators used to be the sign of a successful community. The towering structures, whether owned by farmers or co-operatively by the Saskatchewan Wheat Pool, were places to store and prepare grain before it was shipped to a world market through a network of rails and roads. They were also community hubs where people shared news and did business.

But as farming practices changed and many small farms were replaced by a few large ones, it made sense to have fewer, centralized grain storage vats or newer facilities. Today, the peaks of polished steel grain bins are visible from the road leading to Dubyk’s farm.

Gary Storey, a professor emeritus in the University of Saskatchewan’s department of Agricultural and Resource Economics, wrote for the Encyclopedia Saskatchewan that there were 3,035 primary grain elevators in Saskatchewan in 1950 and that had number dropped to 2,750 by 1970. The number “declined tremendously” after that. By 2004, only 197 primary elevators were left.

Grain elevator enthusiast Jim Pearson, who kept a running tally of all standing elevators in the province, died in 2018. His last count was 427.

When grain elevators were torn down, it often meant some businesses in the community were destroyed as well, said Ray Ambrosi, a Regina-based researcher.

“It demoralizes the whole community, so (the towns) just faded out,” he said.

Elevators were landmarks for communities. When they disappeared, the towns where they stood became nearly invisible. Drivers on the highway would pass them by, contributing “to the decline of rural Saskatchewan,” Ambrosi said.

Some, like Dubyk, want to save the grain elevators that are still standing. But conserving the wooden structures is no easy feat.

The elevator on Dubyk’s land was built in 1923 by the Saskatchewan Co-operative Elevator Company. Dubyk’s family later bought it from the Saskatchewan Wheat Pool and rented it out to an area farmer until the 1990s. By the 2000s, it had fallen into disrepair and Dubyk no longer rented it out.

A plow wind tore the elevator apart in 2010, ripping the driveshed off and tossing it 200 yards away. Rain and wind pelted the tower’s open side. Exposed to the elements over years, its boards warped and rotted, squishing together as the elevator lost its footing and its structural integrity weakened.

Trespassers, ignoring the private property signs posted on the farm’s fences, turned from annoyance to liability. Dubyk began to worry. He would be responsible if people ventured too close to the tower and a piece fell on them.

The building was unsound and he estimates it would have cost $100,000 to restore it — a cost he wasn’t willing to bear.

Attempts to work with insurance companies, heritage groups and the local government office all hit roadblocks. In the end, he burned the landmark down.

“We kept putting it off, and putting it off. Finally, for liability reasons and the amount of damage done by the storm — it was nearly 100 years old — begrudgingly we had to get rid of it,” Dubyk said.

Hilary Grant, a heritage researcher who’s studied Saskatchewan elevator conservation, said it’s “short-sighted” for governments not to offer some solution to preserve the structures, even if the communities around them are disappearing.

She knows how tough it is for people and communities to save these elevators; in addition to the cost, she says efforts to preserve elevators run up against jurisdictional challenges. Many of the towers were built along railway lines, which makes them federal properties that can’t be given provincial or municipal heritage designations.

Grant said grain elevators could be made a federal responsibility — as has been done for lighthouses that dot the east coast, and railway stations. Those structures receive federal protection, which means they should at least be mothballed and conserved for future generations.

Many lighthouses are not turned into museums; rather, they are treated “like abstract sculptures in the landscape” and allowed to live on as symbols, she said.

Elevators could be reimagined as community hubs

Researcher Ali Piwowar, who wrote her masters thesis in architecture on preserving the heritage of grain elevators, suggested reimagining them in Indian Head as cafes, hotels and libraries, and proposed moving them to larger urban centres, such as Regina, for wider public access.

The community never implemented her plans and the last elevator there disappeared this spring.

She remains optimistic about the future of the province’s grain elevators. Since her thesis was published in 2015, she’s been involved with about 30 communities that want to discuss the roles their local elevators can play.

She was drawn to grain elevators because of their “layers of stories and values,” Piwowar said.

“That’s where they transcend from just objects of what you think are important, to these monuments or landmarks that are really just so intrinsically entwined in the prairie landscape.”

From the 1950s to the ’70s, Fayant’s uncles and older cousins could often be found dangling off the sides of grain elevators with buckets of paint.

That’s because when the Saskatchewan Wheat Pool needed labour to maintain its elevators across the region, it regularly hired Métis workers like Fayant’s family members. The workers travelled widely across the province, sleeping four to a motel room. Preserving the elevators was dangerous work with few benefits.

“For something that’s so iconic … somebody had to maintain those giants and it was largely Métis people that did that work,” Fayant said.

“Where you have an elevator, you don’t have a Métis person far away.”

When elevators went up, it meant farmers were moving onto the land and Indigenous people were displaced. As a symbol of intensified farming, Fayant says grain elevators represent a severe disruption to traditional Indigenous economies and cultures.

Fayant says this narrative needs to be part of the remembering of the grain elevators.

“We can’t smile with the rest of all prairie people as we look up at these giants because we know the harm they caused our community.”

Some structures are becoming teaching tools

Elizabeth Scott, an adjunct history professor and curator at the Western Development Museum, says there is value in having the elevators preserved as teaching tools. The museum’s elevator, based in North Battleford, has been invaluable for teaching agricultural, architecture, and settlement and railway histories, she says.

The WDM acquired its elevator from the Saskatchewan Wheat Pool in 1983, when the buildings were still widely in use. Roughly 30 SaskPower volunteers cut about 40 power lines to move it 70 kilometres to North Battleford from Keatley.

Their decision to save the building means younger visitors can start to understand the web of elevators that once brought communities together.

“To have one standing and to have that heritage still physically in place will become more rare,” Scott said.

In Val Marie, about 360 kilometres southwest of Regina, community members rallied around the town’s derelict grain elevator, fundraising and bringing in $60,000 for the cause, according to the elevator’s website.

The effort was led by Maurice Lemire, whose father was the village’s first elevator agent, and assisted by many of the community’s older residents who remembered the days when the elevator was functional.

Kristin Catherwood, the living heritage director for Heritage Saskatchewan, says the number of people who can recall those days is shrinking.

“Sometimes, with the nostalgia of the elevator, it’s not thought about, how younger people don’t actually have any connection to grain elevators,” she says. “That symbol is starting to vanish, actually, as well as the physical structure.”

History classes don’t usually cover how Saskatchewan’s small towns became the way they are. So two years ago, Catherwood worked with high school students in Val Marie to ask what it meant to save their community’s grain elevator. Many didn’t know until they interviewed older residents in the community and learned about the structures’ history and value.

The Val Marie elevator is now a municipal heritage structure on its way to being a museum. Saving it will fundamentally change it, but Catherwood thinks its history could empower young people to guide their community forward.

Jayne Hanson, a first-year nursing student at the University of British Columbia in Kelowna, was in Grade 10 when she took Catherwood’s class. She says the elevator used to be nothing more than a landmark for her; the first thing she saw when returning home to Val Marie. She never considered how it was once the heart of the town’s economic and social life.

By interviewing older community members, she learned the elevator was home to haircuts, boot repairs, and after-hours socializing on top of farming business.

“Once you go into it, you can almost feel how busy it used to be,” Hanson said.

For Catherwood, preserving and saving the roots of the community could be the first step in revitalizing it. 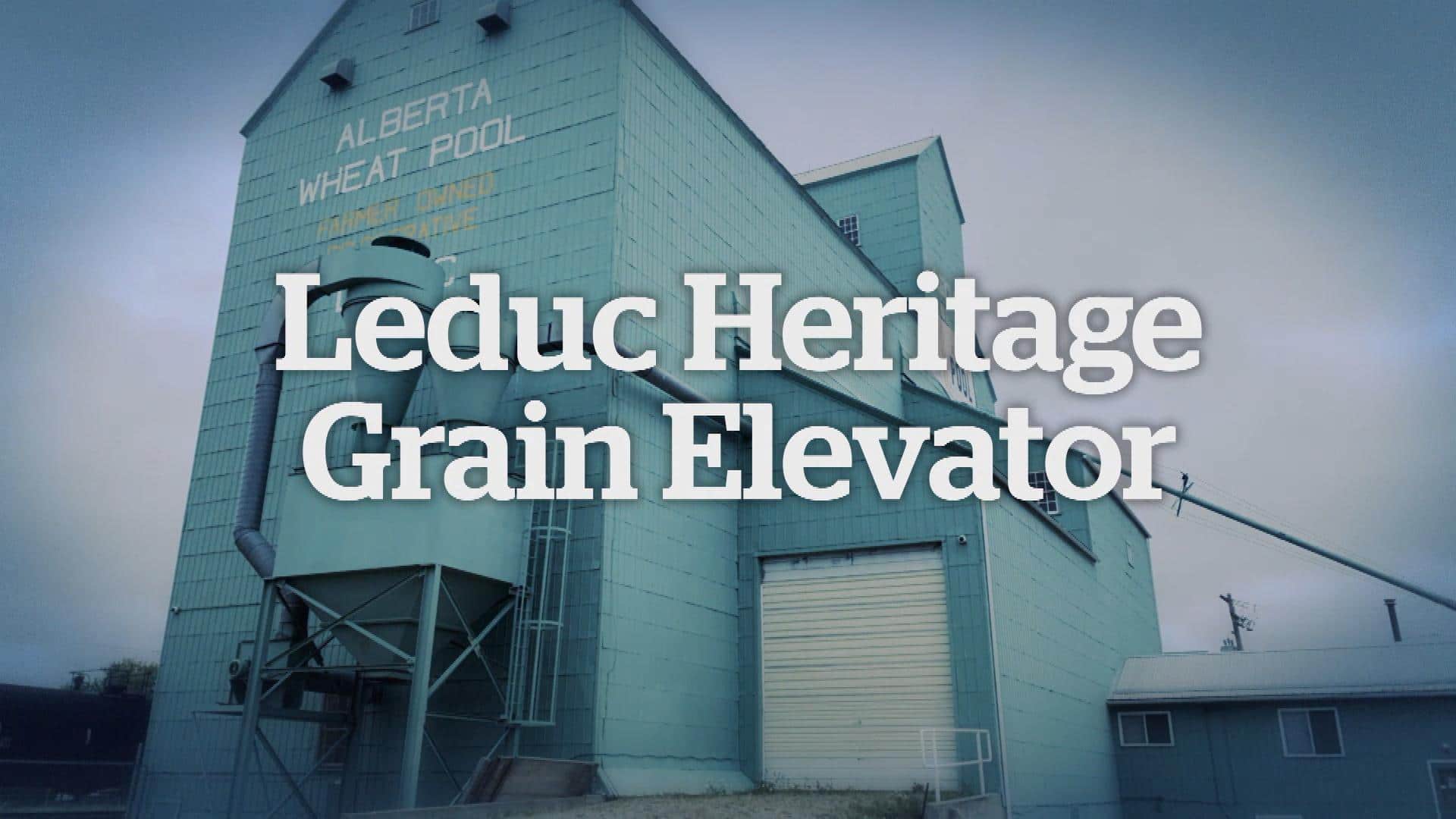 Holding pieces of the past

Today, a large portrait of Dubyk’s elevator hangs in his home, alongside small items he’s made using reclaimed wood from the structure. Other photos show him working on the farm with his grandparents and parents in the shadow of the tower.

He’s taking a small stand for the weigh scale that used to sit in the elevator.

“It just brings back all those memories; three full generations here,” he says.

“It is strange to not see it. I’m maybe getting a bit more used to it now, but that was the first thing you always noticed.”

He plans to eventually level the elevator site, but he’s been putting that off too.

When it finally happens, the last traces of a tower that once burst with so much life will be erased for good.