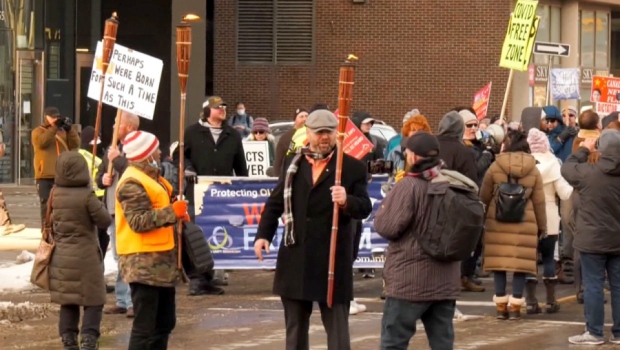 CALGARY — Calling it “disgusting behaviour” that needs to be “denounced strongly” Mayor Naheed Nenshi called out anti-lockdown protesters who carried tiki torches through downtown Calgary over the weekend.

Hundreds of protesters — both those calling for an end to mask mandates and other health measures, and those who oppose that group — converged at city hall on Saturday, each side hurling insults and accusations at the other.

There was also a heavy police presence on Saturday to keep things peaceful but several anti-mask protesters were seen carrying tiki torches, which have a connection to a deadly 2017 white nationalist rally in Charlottesville, Va.

“It has been increasingly clear to me over the last several months that these marches that pretend they are about lifting the lockdown — there is no lockdown by the way, shops are open, schools are open, restaurants are open, people have the ability to go out and do many, many things that they normally would have done — have increasingly become forums for hatred, for white nationalist groups and others to attach themselves to this conversation, such that the original discussion is completely lost,” said Nenshi on Monday morning.

“And certainly many of us have been raising the alarm on this for some time. I know Coun. (Jyoti) Gondek and I in particular, even in the summer and the fall, were saying it’s time to stop pretending these protests are about anything other than what they are actually about.

Nenshi said torches are becoming a symbol of hate.

“It’s not about the tiki, it’s the fact they’re burning torches,” he said.

The protest group, called March for Freedom has been holding demonstrations in downtown Calgary almost on a weekly basis, despite bans on outdoor gatherings that have come and gone, since last year.