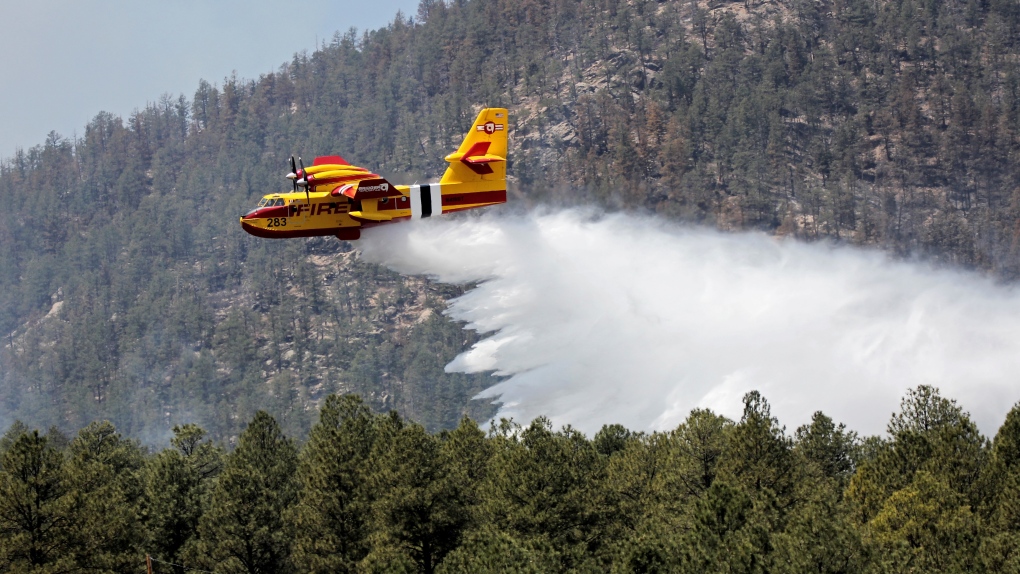 Thousands of firefighters battled destructive wildfires in the Southwest as more residents prepared to evacuate during the weekend in northern New Mexico where strong winds and dangerously dry conditions have made the blazes hard to contain.

The biggest fire in the U.S. grew to more than 303 square kilometres on Friday northeast of Santa Fe. Gusty winds prevented any aerial attacks by midmorning and crews lost some of the containment they had established in previous days.

The rapid rate of the spread of the fire was exceeding dire predictions in some areas, incident commander Carl Schwope said Friday night.

“We’re in a very dangerous situation. Evacuation statuses are changing as we speak,” he warned at a briefing in Las Vegas, New Mexico, about 80 kilometres east of Santa Fe.

More air and ground forces were on the way, he said, to fortify the nearly 1,000 firefighters on the fire lines there and winds that gusted up to 65 mph were beginning to subside as nightfall approached.

There were no immediate reports of any new structures have been lost since the local sheriff confirmed Thursday night at least 166 homes have been destroyed in northeast New Mexico’s rural San Miguel County.

But erratic wind shifts in some of the driest conditions the region has seen in years were forecast again Saturday, and authorities were making preparations to evacuate some residents as far north as Taos.

“Just getting people out of the way, that’s been the mission today,” Sheriff Chris Lopez said at the briefing in Las Vegas. Some of the most active fire was heading in the direction of that town but he said the town itself was not in immediate danger.

Fire lines were bolstered outside the rural New Mexico community of Ledoux in efforts to save structures, and they appeared to be holding.

More than 2,000 firefighters were battling fires in Arizona and New Mexico on Friday — about half of those in northeast New Mexico, where a total of more than 484 square kilometres of mostly timber and brush have been charred.

Red flag warnings for extreme fire danger were in place Friday for nearly all of New Mexico and parts of Colorado, Texas, Oklahoma and Kansas.

The fires are burning unusually hot and fast for this time of year, especially in the Southwest, where experts said some timber in the region is drier than kiln-dried wood.

“We still have some fire weather to get through tonight, tomorrow and several days afterwards,” fire behavior specialist Stewart Turner said at Friday night’s briefing in Las Vegas, New Mexico.

“It’s very important that everybody pays attention to the evacuation orders because this is a very, very serious fire — very dangerous fire behavior out there.”

“Here, you’re losing meager homes, but it’s everything. It’s all they had,” said Probst, a coordinator of county health services for wildfire evacuees.

Rural families in the area were caught off guard after heading home from an early evacuation — only to be ambushed by a fast-moving fire last week.

A 79-year-old widow from the tiny community of Sapello left her house and a blue heeler cattle dog for a doctor’s appointment, with boxes packed for possible evacuation with jewelry and her 1964 wedding photos. Winds kicked up, and police said it was too late to go back for anything.

“They said, `No ma’am, it’s far too dangerous,”‘ said Sonya Berg in a phone interview Friday from an emergency shelter at a nearby middle school.

A close friend says the house burned, but Berg doesn’t want to believe it. A neighbor rescued the dog.

“I’m in denial until I go and see it,” said Berg, whose husband passed away in 2019 and was buried outside the home. “He’s up there, he’s been through the whole thing. I’m hoping the gravestone we put up is still there.”

In the Jemez Mountains east of Los Alamos, another wildfire spanning 30 square kilometres crept in the direction of Bandelier National Monument, which closed its backcountry hiking trails as a precaution while central visiting areas remained open.

In northern Arizona, authorities are nearing full containment of a 77-square-kilometre blaze that destroyed at least 30 homes near Flagstaff and forced hundreds to evacuate. A top-level national management team turned it back over to the local forest Friday.

“It’s pretty stable for the most part,” said Coconino National Forest spokeswoman Randi Shaffer. “We’re not seeing any forecasted crazy weather patterns. We have fire crews monitoring, all of our suppression efforts have been holding.”

Some residents near another fire 16 kilometres south of Prescott haven’t been allowed back home. Firefighters have about one-third of the 37-square-kilometre fire’s perimeter contained. Lighter winds were expected into the weekend, but low humidity will be a concern, fire officials said.