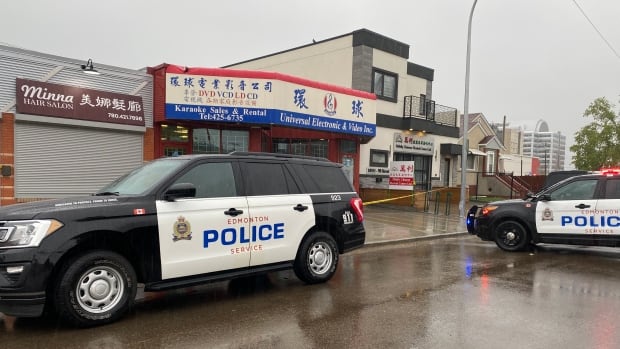 Alberta Justice Minister Tyler Shandro is using his authority under the Police Act to direct Edmonton Mayor Amarjeet Sohi to boost policing in the city’s downtown and transit system.

In a letter to Sohi on Tuesday, Shandro outlines his concerns around a sharp increase in violent crimes and disorder.

Shandro has directed the mayor to “take action” and submit a public safety plan to the province within two weeks.

“I have a responsibility under the Police Act to ensure the people of Edmonton receive the law enforcement protection they deserve,” Shandro writes in his letter to Sohi.

“Edmontonians should feel safe and secure when using public transit, visiting restaurants, attending events and walking the streets in their own community.”

Edmonton Police Service data shows crime in the city’s core rose by 11 per cent in 2021, Shandro says in the letter.

Shandro says crime levels in Edmonton’s downtown and within the city’s transit system have reached “extremely concerning and unacceptable levels.”

Sohi has not responded to a request for comment from CBC News but is expected to respond later Thursday.

The call for an improved policing strategy comes as the city grapples with a string of violent crimes in the core, including the killings last week of two men in their 60s in Chinatown. A 36-year-old man is charged with two counts of second degree murder.

The homicides have become a rallying cry for community members who flooded council chambers on Tuesday, calling for help in dealing with crime and disorder in Chinatown.

Section 30 of the Police Act outlines the powers the provincial government has to intervene on policing matters within municipalities.

The act says that when the justice minister believes a municipality is not providing or maintaining adequate and effective policing services, the minister may notify the municipal council to take action that “the minister considers necessary to correct the situation.”

In his letter, Shandro highlights the dangers of travelling on the LRT.

“A simple walk through transit corridors is often met with open drug use and irrational behaviour of many who use these locations to loiter for extended periods of time,” the letter says.

“A real and perceived threat exists for the many commuters who rely upon public transportation to support their livelihood.”

Shandro refers to the Chinatown killings and a string of other violent crimes in the city, including recent attacks on city transit.

In late April, a 78-year-old hospital worker was seriously injured when she was pushed onto the tracks at the Health Sciences/Jubilee LRT station.

“While unhygienic and garbage-strewn conditions remain all too common, it is the drug use and aggressive encounters that are the more significant safety concerns,” Shandro writes.

The severity of crime at Edmonton’s LRT system and transit centres grew by nearly 60 per cent last year, Shandro says in the letter.

Further data shows a 341 per cent increase in reported medical incidents on transit from 2019 to 2021.

So far this year, EPS has recorded 549 LRT and transit centre disturbances, including 130 violent incidents and 42 weapons complaints.