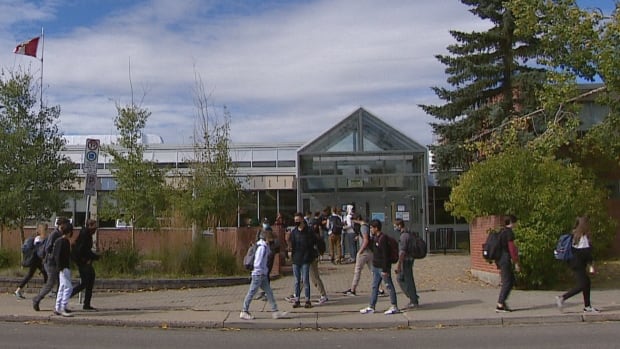 Provincial officials are concerned that two recent COVID-19 outbreaks at Calgary-area high schools could be linked to indoor gatherings.

Last week, an outbreak declared at Cochrane’s Bow Valley High school had 16 confirmed cases of COVID-19 — which put more than half of its students and teachers in isolation.

Rocky View Schools told CBC News in an email last week that since a majority of students are able to attend class and they have enough substitute teachers, the school will remain open.

“The school’s focus right now is on thoroughly and thoughtfully responding to the immediate situation. Any resulting next steps will be developed under the advice of AHS and as we know more.”

On Friday, Bowness High School in Calgary announced an outbreak which shifted around 1,184 students in grades 10-12 to online learning.

According to the provinces’ website, an outbreak refers to schools with five to nine cases.

The Calgary Board of Education said in an email to CBC News that students at Bowness High School will return to in-person classes on March 17.

Indoor gatherings could be cause

Dr. Deena Hinshaw, Alberta’s chief medical officer of health, says one concern that has been raised is that these two outbreaks might have been started because of large indoor gatherings.

“Remember that your actions don’t just impact you, they impact those around you. And again, not just your immediate circle, but there is a knock-on effect of transmission that flows through all of our networks if we’re not cautious,” she said at a COVID-19 briefing on Monday.

Hinshaw says while she knows restrictions can be frustrating, now is not the time to put our communities at risk.

“It’s critical that the behaviours not just inside of school, but outside of school are those that prevent the spread,” she said.

“A single indoor gathering can cause the spread of COVID-19 from one person to many overnight.”

She reminds the public that social gatherings are not allowed under current health restrictions.

Grade 12 Bowness student Annabel Johnson says hearing about the alleged parties has her annoyed by the selfish action of her peers.

She says last week, several Grade 11 classes were sent home and that’s when she first heard about a party that had happened.

“I just feel like some people are being very selfish and irresponsible. A lot of Grade 12s are upset because it’s our last year and we’re probably not going to be doing much of a grad thing, so it just feels like a punch in the face a little bit.”

The student says in the past two years, she has had to switch to online learning three times.

“I’ve only had to go online when the whole school has been online,” she said.

“The hardest part for me is just the constant change … I had gotten back into used to going to school and going to my classes, so now it’s just hard to get back and used to doing it from home.”

The province lists 64 schools as currently having outbreaks. There are 31 schools where variant cases of the virus have been confirmed.

In-school transmission has been confirmed at nine of them, with 20 students likely acquiring the variant at school.