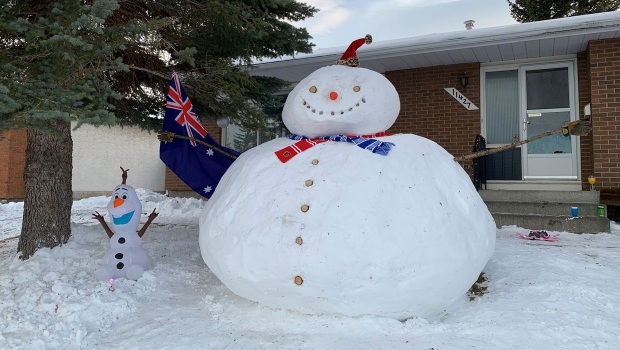 CALGARY — Plenty of Calgary families found some creative ways to make the most of the ice and snow, avoiding shopping centres.

“We really enjoy tobogganing, and so this is just a next step,” said Karen Mansell who came to the tube park with her son. “It actually feels safer sometimes, so it’s really enjoyable.”

WinSport officials they were able to reopen the tube park after recent heavy snowfall.

“Thanks to Mother Nature’s huge dump that we had earlier this week and the opportunity to make snow – it’s perfect tubing conditions,” said Dale Oviatt, senior manager of communications at WinSport.

Bookings must be made in advance online for specific time frames and physical distancing and masks are required.

“The big thing this year is following the protocols and that’s the difference from previous years. We’ve had a reservation system in place previously but we brought it out this year again,” said Oviatt.

The Spokes family built a giant snowman in front of their home in Braeside.

It’s large enough to have steps carved into the backside so that six-year-old Emily and four-year-old Finn can climb up to the snowman’s head, and slip down the makeshift slide.

“It’s really fun, being cooped up in the house for a lot of the year, just to get outside and do something together has been really nice to do this time of year,” said Natasha Spokes.

Instead of planning a icy swim for New Year’s Day as per tradition — organizers of the Calgary Icebreaker Polar Dip challenge have been asking participants the plunge in any cold water they choose.

Between Nov. 1 and Jan. 11, participants donate, take a photo or video of their frigid dip for 11 seconds, and challenge another person to do the same.

“The idea is that people can do the dip at their own leisure in a place of their choosing. So they could do it in the bathtub, filled up with freezing cold water, they can jump in the river,” said organizer Jill Plett.

Funds raised go to the SA Foundation which is aimed at ending human sex trafficking.