STANDOFF, ALTA. — According to a group of Blood Tribe members who spoke to local media on Wednesday, there isn’t enough being done to combat the impacts of the ongoing opioid crisis on the Blood Reserve.

“All of the complaints people have been coming forward with are falling on deaf ears with our leadership. It has to come to a stop,” said president of the Standoff Community Association and Elder Ron Scout Sr.

One hot button topic for the group is the handling of the Bringing the Spirit Home Detox Centre.

The Blood Tribe Police Service (BTPS) confirmed to CTV News that they have received a number of complaints about drugs being brought into the centre.

BTPS said the general investigations unit is currently collecting data and working to determine if the allegations are true, but without proper funding from the government, it’s difficult to tackle the root of the issue.

“Right now our First Nations’ policing model is an archaic way of funding. It’s just not sufficient enough for us to be able to do ourselves to do our jobs effectively as it’s demanded by the community,” said acting Inspector of the Community Policing Division Rayan Najjar.

“That is something that the federal and provincial governments need to negotiate with the local governments to get us the proper resources that we need.”

According to the BTPS, there have been approximately 16 people charged with possession or possession with the purpose of trafficking on the Blood Reserve since January 2020.

But for those at Wednesday’s rally, the Tribe’s leadership doesn’t have the right approach in dealing with the opioid crisis.

“We don’t even know half the time who’s funeral it is. We are having funerals every day it seems like,” said Elder Charlene Plume.

Plume adds that with Blood Tribe Housing evicting individuals who are accused of selling drugs, more struggling addicts are left in an even deeper state of despair.

“About eight or nine of the people they have evicted from their homes have passed away. They just totally gave up.”

25-year-old mother of one, Linda Simone Eagle Speaker is one of the most recent tribe members to have passed away from an overdose after struggling with addiction. 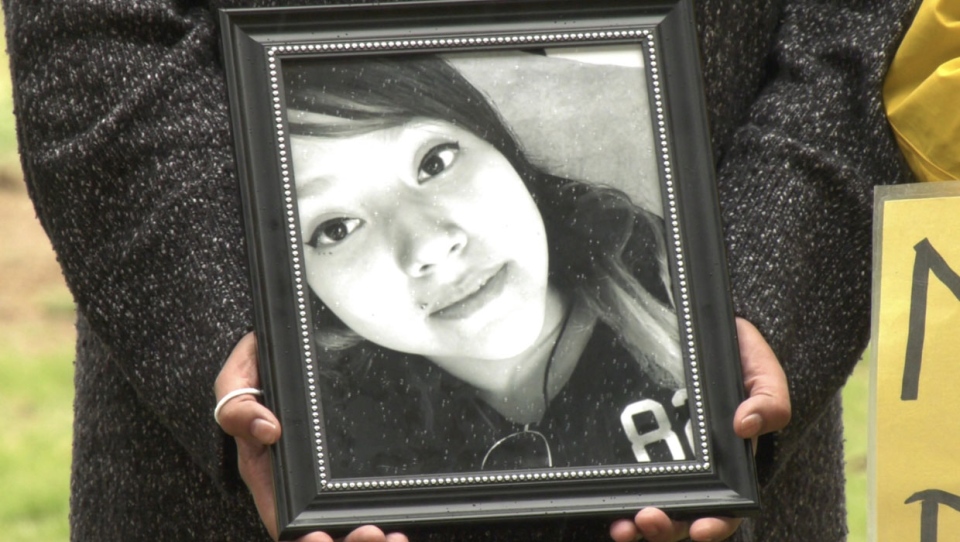 Eagle Speaker’s mother, Samantha Shouting, said she’s disappointed with the lack of support and effort by the community to help her daughter.

“My daughter was evicted by Housing three weeks ago. From then on before her death, she was hopeless. She had nowhere to go. How does someone recover who is an addict if they have no more home?” she said.

Shouting added that she wishes mental health services, addictions counselling and other support programs could have come together to help her daughter get clean.

“They took her baby and then that was it. They had nothing to do with her. No social workers went to go talk to her, when she went missing I’m the one looking for her,” she said.

Wednesday’s rally was organized by Roger Prairie Chicken, the former crisis coordinator for the Kainai Wellness Centre, who said the true statistics he recorded and shared with Chief and Council aren’t being properly highlighted.

“We lost 184 Blood Tribe members, all 30 years and up, and it pertains to alcohol and opiates,” he said.

According to Prairie Chicken, those deaths occurred between April 2020 and March 2021 with 57 per cent of overdose deaths coming from illicit drugs and the rest as a result of overprescribed legal drugs and alcohol.

On May 5, Blood Tribe leadership implemented an opioid task force in response to the ongoing crisis.

The following statement from the Blood Tribe Department of Health was sent to CTV News:

“Our leadership and health professionals continue to work very hard to address this opioid and addictions crises and our frontline workers are exhausted but continue to work over and above to combat this continuing crisis, by dealing directly with emergencies, creating a task force, involving families and communities, implementing harm reduction measures, operating the life-saving detox centre and developing a 75-bed unit to deal with this crisis. We look forward to continuing to work with our community members to address this crisis.”