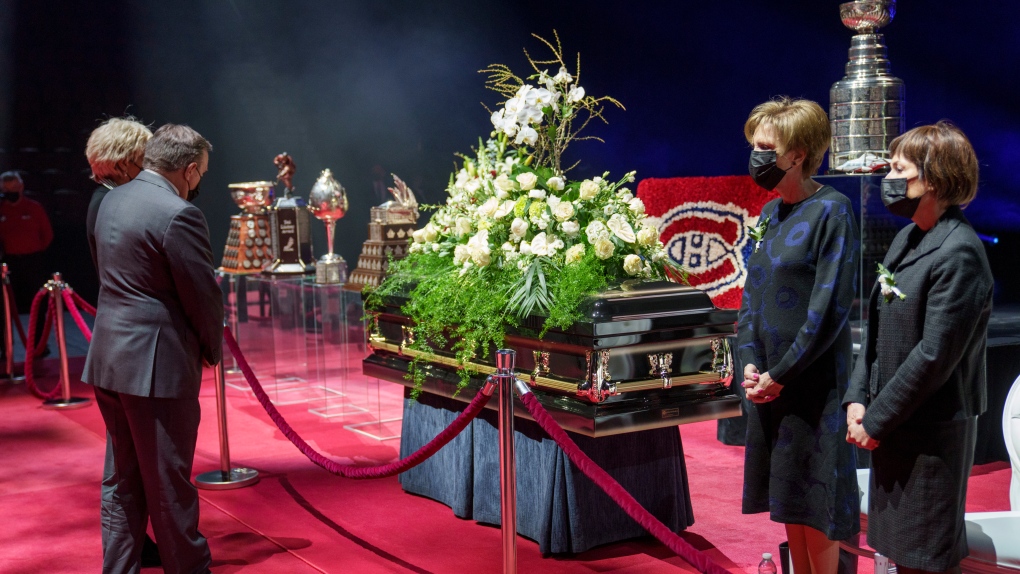 Habs fans are saying their final goodbyes to Guy Lafleur on Sunday as the late hockey legend lies in state at Montreal’s Bell Centre.

Nicknamed, “the Flower,” the Montreal Canadiens icon played for the team for 14 years during the 70s and 80s and helped bring home five Stanley Cup trophies. He remains the all-time scoring leader for the Habs.

Lafleur died at the age of 70 on April 22 following a battle with lung cancer.

“Out of respect for the public, which has supported Guy over the years, the Lafleur family has agreed to share their grief with the community. And in keeping with the family’s wishes, all activities will reflect the image of the late hockey legend: they will be humble and accessible,” the Montreal Canadians said in a statement last week.

Members of the public will be able to pay their respects to the hockey great on Sunday from noon to 8 p.m. and Monday from 10:30 a.m. to 3 p.m.

Quebec Premier Francois Legault also made a visit to Lafleur’s casket on Sunday. Legault announced last weekend that the Quebec government would honour Lafleur with a national funeral, reserved for Quebecers who make significant contributions to the province.

“(It’s) sad, of course. He was only 70 years old. I’m 64, so It’s scary,” he told reporters at the Bell Centre on Sunday afternoon. “I lost my father young. He was 59 years old. So, at the same time I remember moments I had with my father, watching Guy Lafleur and hearing the crowd saying ‘Guy, Guy, Guy!'”

The funeral is scheduled to take place on Tuesday at 11 a.m. at Mary Queen of the World Cathedral.

The Canadiens failed to make the Stanley Cup playoffs this year but ended the season with a bang, scoring 10 goals against the Florida Panthers on Friday night — 10 like the number on the back of Lafleur’s jersey.

“Friday night, we had 10 goals. Some people said it’s because of Guy Lafleur. Now, everything with the number 10 (is) Guy Lafleur,” Legault said.

With files from CTV News Montreal