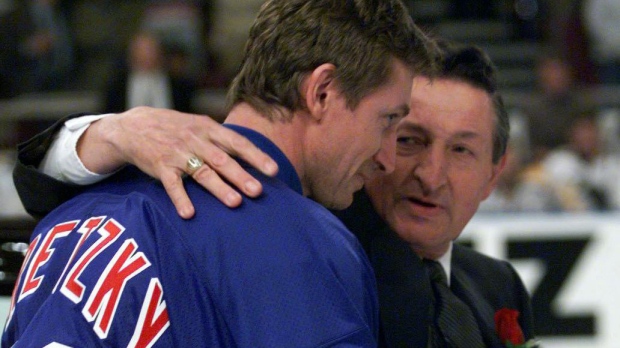 TORONTO — The funeral for Canada’s hockey dad is underway.

His funeral is being held in Brantford, Ont. where mourners will pay tribute to Walter Gretzky.

Walter Gretzky, father of Wayne Gretzky, died Thursday after sustaining a hip injury three weeks ago, Wayne Gretzky said at the funeral. He was 82-years-old.

The father of the Great One became a household name alongside his son, a symbol of the dedication and commitment from parents across the country who see their children through sports to professional levels.

Condolences poured in on Friday after Wayne Gretzky confirmed the death of his father in a social media post.

“Dad was our team captain – he guided, protected and led our family every way, every day,” he said in a statement.

Prime Minister Justin Trudeau also offered his condolences saying, “Walter Gretzky cared deeply about his family and his community — his kindness was undeniable, his passion was obvious, and his impact was immense. My thoughts are with Wayne and the entire Gretzky family, and all who are mourning the loss of Canada’s hockey dad.”

Hockey fans took to Twitter to share memories of Walter, proving that his loss was felt across the country and throughout the sport of hockey. He signed their jersey, he made them laugh, he gave them a smile, they felt he cared.

Walter was a staple and a celebrity at Toronto Maple Leafs home games, often waving to anyone who said hello. Many said he was never too busy to chat, and always had a smile on his face at the rink.

Walter was there every step of the way as Wayne dominated the sport, eventually leading the Edmonton Oilers to four Stanley Cups in the 1980s on top of countless other accolades.

NHL commissioner Gary Bettman paid tribute to Walter’s love for the sport and how he “embodied all that is great about being a hockey parent.

“Walter instilled in (his children) not only an uncommon understanding of hockey’s essence, but a love and respect for the game that has become synonymous with the name Gretzky, all while ensuring that the game was fun to play,” Bettman said in a statement.

– With files from The Canadian Press