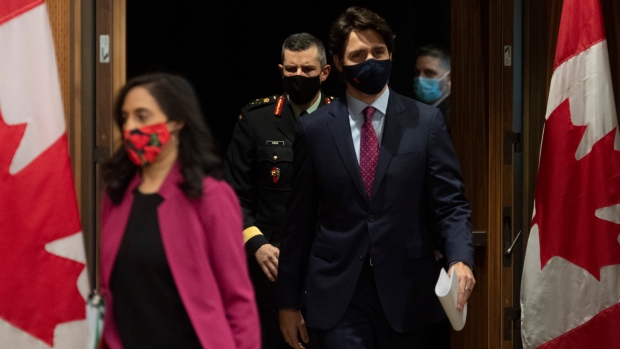 OTTAWA — The federal government has secured an additional eight million doses of the Pfizer-BioNTech vaccine coming over the next few months, Prime Minister Justin Trudeau announced Friday, just as Moderna revealed coming shipments will be smaller than promised.

Prior to this update, Canada was scheduled to receive more than one million doses a week through to the end of May, and starting in June Pfizer had committed to sending closer to two million doses. With the new contract, Canada is now on track to have a total of 23.8 million doses of the two-shot vaccine by the end of June.

After shortages in the winter due to an expansion at Pfizer’s European manufacturing facility, Canada has consistently been receiving the promised shipments from the pharmaceutical giant, something Trudeau thanked them for on Friday.

This increase though, follows on the heels of Procurement Minister Anita Anand confirming that late on Thursday that Moderna informed Canada that the next expected vaccine shipment scheduled for the end of April will be 650,000 doses instead of the more than 1.2 million expected.

Further, Moderna is now saying that up to two million of the total 12.3 million doses promised to come to Canada this quarter “may” be delayed until the third quarter due to a “slower than anticipated ramp up of their production capacity” that is affecting a number of countries.

The government had already signalled that while the delivery was supposed to arrive the week of April 19-25, it could be later, meaning it may be early May before the deliveries make it out to the provinces and territories.

Canada’s ramp-up phase of the national mass vaccination effort has been plagued by Moderna delays for weeks, while uncertainty is lingering over deliveries of AstraZeneca and Johnson & Johnson vaccine doses.

It’s inconsistencies like this in the delivery plan that has frustrated premiers and seen Canada’s logistics lead Maj.-Gen. Dany Fortin pledging to work closely on risk managing the situation.

“We are disappointed, and while we understand the challenges facing suppliers in the current global market for vaccines, our government will continue to press Moderna to fulfill its commitments,” Anand said in Friday’s statement.

While Moderna met its first quarter dose commitments and moved its shipment intervals up from every three weeks, a “quality assurance processes backlog” has meant the latest shipments to Canada have been inconsistent. The last Moderna shipment to arrive on time and in full was on March 11.

“We share the urgency of getting vaccines to Canadians as rapidly as possible. That is our work, each and every day, for all approved vaccines,” said Anand.

The pressure to vaccinate more Canadians is being magnified by the exploding third wave of infections in several major provinces, seeing the Canadian Medical Association call for “extraordinary” new measures, including marshalling national resources.

The CMA is calling on the federal government to “consider re-prioritization of its vaccine distribution strategy” to focus on areas in urgent need rather than the “per-capita approach” currently implemented.