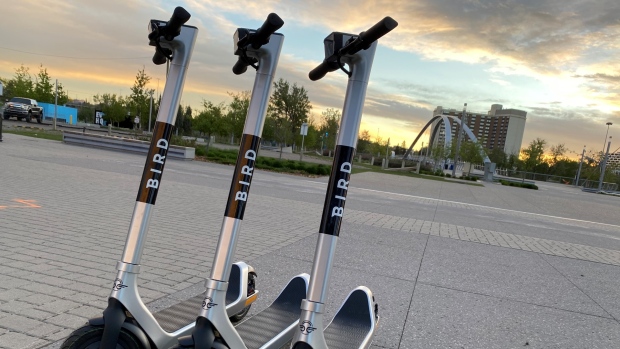 CALGARY — Thousands of Calgarians will get their first chance this year to zip around the city Friday morning as electric scooters are back for a new season.

Contracts were awarded to e-transport companies, Bird Canada and Neuron Mobility, both of which will be allowed to operate 750 scooters each as of May 28.

Ward 8 Coun. Evan Woolley says the decision was made based on the growing popularity and interest Calgarians have indicated to city officials.

“Calgarians love e-scooters,” said Wolleey. “We were the first Canadian city to record one million rides and we continue to see demand for this type of micromobility.

“As businesses began to open up and Calgarians continue to look for ways to safely enjoy the outdoors, e-scooters will be a big part of that.”

Bird Canada originally participated in the e-scooter pilot and has since chosen Calgary as the location for its Canadian operational headquarters.

The company soon plans to expand its offerings to include electric bikes and aims to create 75 full-time jobs that will help grow the business and develop the program.

Neuron Mobility, based in New Zealand and Australia, has been around for the past three years and will make its debut in North America.  It intends to hire 45 full-time positions locally.

A cap of 1,500 shared e-scooters operating is in effect in an effort to help reduce clutter and cut down on improperly parked scooters.

The city is reminding Calgarians that scooters can only be operated on sidewalks, pathways, bike lanes and some roads with lower speeds.

Scooter companies will be handing out $10 fines through their rental apps for bad parking jobs.