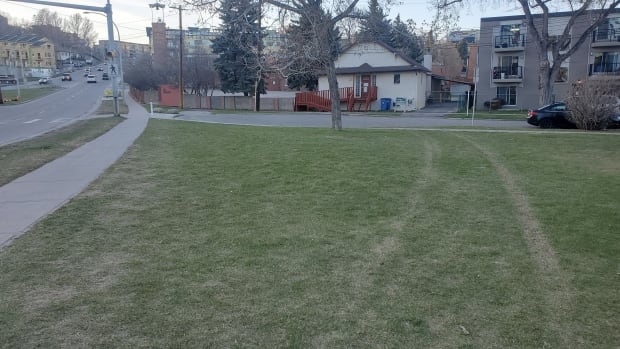 Calgary police are looking at laying impaired driving charges after a vehicle veered off Edmonton Trail N.E. on Tuesday and struck a pedestrian head-on, killing him.

The victim, who was standing on a on a grassy area near a “highly populated, inner-city street” in Bridgeland, was thrown “a significant distance,” according to police.

The 36-year-old man died at the scene.

“A man lost his life as the result of a driver who we believe was impaired,” said police in a written statement.

“Our sincere condolences go out to the victim’s family and friends who are grieving his senseless loss.”

Just before 3 p.m., a 2020 Ford Ranger was travelling north on Edmonton Trail toward the intersection at Second Avenue N.E.

After hitting the pedestrian, the truck continued across the grassy area and into a turning area at the end of the Second Avenue cul-de-sac, where it hit another vehicle.

The 38-year-old driver was arrested at the scene and released with a driving suspension.

Neither the name of the alleged driver nor the victim have been released at this time.

Investigators are asking anyone with information about the crash to contact police by calling the non-emergency line at 403-266-1234.

Anonymous tips can be sent through Crime Stoppers.