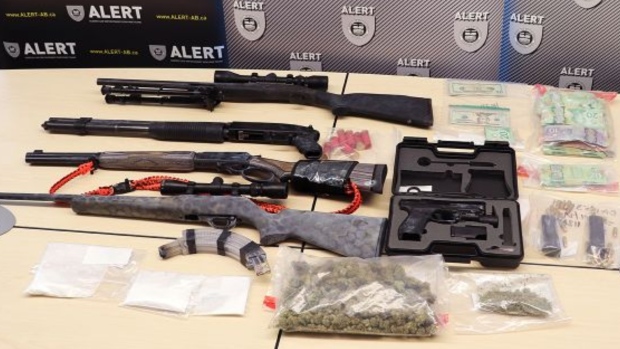 CALGARY — Two men and a woman face charges after police raided a home in the northwest neighbourhood of Banff Trail and a residence in Strathmore as part of an investigation into suspected drug trafficking.

On April 28, Alberta Law Enforcement Response Teams (ALERT) members — aided by Calgary Police Service and Strathmore RCMP — searched a home in the 2400 block of 21st Street N.W.,  and a home on Brentwood Drive in Strathmore, along with several vehicles including a truck and a motorcycle.

As a result of the searches, officers seized:

Three people were arrested in connection with the drug trafficking investigation and subsequently charged with drug and weapon-related offences. The accused are:

ALERT officials confirm the accused are known to police and the five firearms will undergo forensic analysis and ballistics testing.