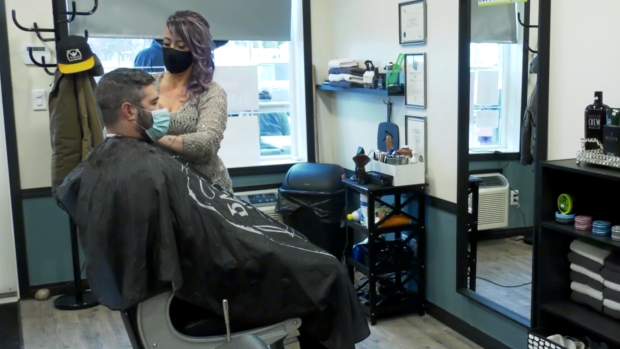 CALGARY — Charges against the owners of an Innisfail barbershop have been dropped by the Crown, following a clerical error in the disclosure package.

The Alberta Crown Prosecution Service says charges against Bladez 2 Fadez, which were laid after the business opened in defiance of public health orders, have been dropped because ‘the disclosure package was not before the prosecutor handling this file.’

“The cause of the error has since been identified and the RCMP is looking into next steps.”

The service would not say where the clerical error originated and who was at fault.

RCMP tell CTV News that it has an open investigation into the incident, but would not say if charges would be laid again.

Natalie Klein, who owns Bladez 2 Fadez found out through her lawyer on Monday that the charges had been withdrawn.

Klein reopened her business on January 12th after it was shut down for a month due to a mandated order.

She was then warned by AHS, and ticketed by RCMP for removing an AHS closure notice and violating the public health act.

Doug King, a justice studies professor at Mount Royal University, says this incident has been muddied by both the RCMP and the Crown.

He says it’s still unclear whether these violations could be brought forward again.

“(Have) the tickets been withdrawn permanently or are they are going to be pursued after more evidence is collected or shared,” he said. “So it’s really, really unusual and it needs to be clarified.”

King says the ‘clerical error’ may have been as simple as a missed document or attachment when RCMP handed the file over to the Crown.

“It could be nothing more than a simple administrative oversight,” he said.

Since this is a regulatory offence and not criminal, King is unsure whether the charges could be brought back again.

“If it was a criminal matter and the Crown withdrew the charges, they cannot be brought back up,” said King.

“If they stayed the charges, which is a formal technique, they’re stayed for a year and then the charges could be brought up at anytime during that year.”

King says determining whether they lay charges ultimately comes down to proving the offence in a court of law.

“Because this is a ticketed offence, someone could just pay it, without even contesting it,” said King.

King says that evidence could rely on eye witnesses or if the officer had observed something and made notes.