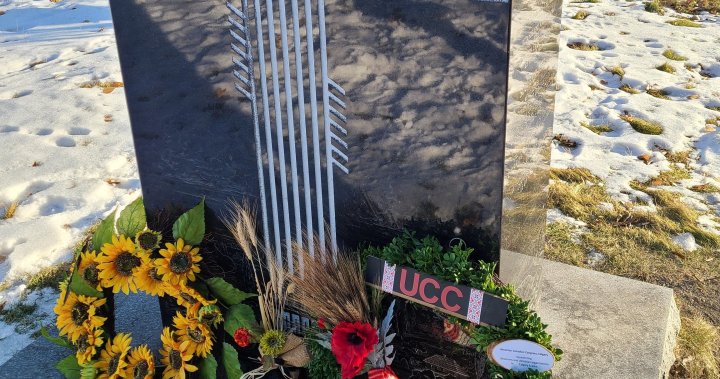 Due to restrictions as a result of the COVID-19 pandemic, it was a scaled back ceremony Saturday in Calgary on the day of remembrance for the victims of Holodomor.

A small group from Calgary’s Ukrainian community laid a wreath at the Holodomor monument to commemorate the tragedy in Ukraine. It is estimated between six million and 10 million people died from 1932 to 1933 as result of the imposed famine orchestrated by the Joseph Stalin regime.

“This monument is important to us because it allows us to come here and commemorate the victims and also continue raising awareness about one of the most heinous crimes against humanity,” said Inna Platonova, president of the Canadian Ukrainian Congress, Calgary Branch.

We lay a wreath at #yyc #Calgary Holodomor Monument in memory of millions of victims of Stalin’s man-made famine genocide #Holodomor, we light a candle & continue raising awareness about #communismcrimes against #Ukraine and today’s #Russian aggression. Вічная память! #Голодомор pic.twitter.com/lVyRDi9R0O

Holodomor translates to extermination by hunger in English.

It took 50 years for stories of the genocide to become widely known. Many immigrants who came to Canada because of the Holodomor did not share their stories. A census was collected after the famine, Stalin purged the data collected and had the census takers executed.

“The Soviet Union concealed and denied this crime — as well as they deny all other crimes — for a very long time, and today the Putin regime continues denying it, denying Holodomor and denying crimes of today,” Platonova said.

Premier Jason Kenney posted a video on Twitter to commemorate the somber anniversary.

On #HolodomorMemorialDay, we remember a crime against humanity – a ruthless, relentless genocide of the Ukrainian people under the communist regime of Joseph Stalin in 1932-33.

Holodomor Memorial Day is recognized nationally on the fourth Saturday of November, falling this year on the 28th.