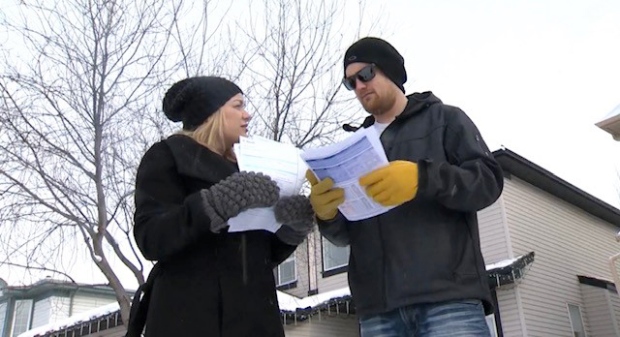 CALGARY — In the year since Kelsi Barclay was diagnosed with depression, she has sought medical help, has been on treatment and says she has not had suicidal thoughts.

By all accounts she says she is healthy, which is why she was puzzled after her application for medical coverage from Manulife was declined.

“As a healthy 32-year-old woman with no family history of medical condition, it was confusing and conflicting for sure,” said Barclay.

She and her husband are small business owners and don’t have access to regular, corporate health-care plans.

She says what is even more frustrating is that her husband’s application was approved and hers was not.

Barclay says during the application process with Manulife, she disclosed to the company her mental health condition. Shortly after, she says she got a letter in the mail declining her coverage. She called Manulife multiple times to find out answers and on the third try had some clarity.

“I was told that because I had suicidal thoughts in the last three years I was automatically denied access to the health care coverage that I requested,” she said.

The Calgary mom was told that suicidal thoughts are a red flag for future hospitalization.

She asked the representative if the same standards are placed on individuals with physical injuries that would put them at a higher risk for hospitalization and says she was told no.

“I don’t think we are taking mental health as serious as we need to be and it’s not just making it more important than physical health it’s just putting it on the same playing field as physical health,” said Barclay.

CTV News reached out to Manulife for a response.

In email, spokesperson Gillian Earle stated, “We are very sorry to hear of this experience and strive to provide a positive experience to individuals applying for insurance coverage.

“We take the responsibility of protecting the privacy of our customers very seriously and cannot discuss specific details of any individual.”

CTV News sent multiple follow up emails to clarify some of the claims Barclay made, however, we’ve yet to hear back from Manulife.

Kaj Kordela, the executive director of OBAD, which offers peer support for people with mental health issues, says he is not surprised to hear of this case.

“I think it happens all the time,” said Kordela.

“I think there’s stigma within families, work places, within insurance, within all kinds of places. I think things are changing, regarding issues of depression, but definitely the stigma still exists.”

Barclay has since posted her story on social media and garnered support from hundreds of people.

She wants to see an equal standard for physical and mental health care. Barclay also wants insurance companies to update their line of questioning and protocol for those with mental health issues.

“I’d like to see those questions be more elaborated on and situations to be taken on a case-by-case basis. If nothing else, seeking out support and seeking out help should be a positive thing not something that chastises you in the future,” she said.