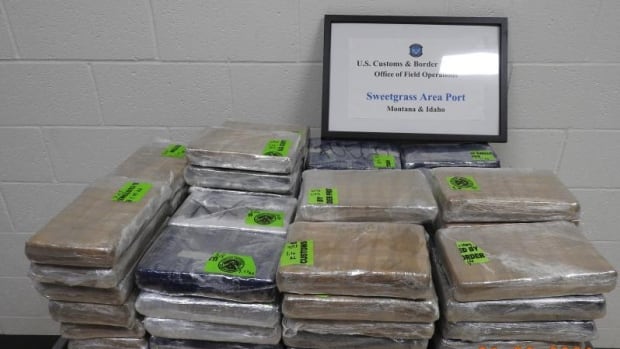 A Calgary truck driver admitted to trafficking drugs after U.S. Customs and Border Protection found 211 pounds (96 kilograms) of cocaine in a trailer load of bananas earlier this year.

Acting U.S. Attorney Leif M. Johnson said in a release the drugs were found during an inspection when the driver attempted to enter Canada on Jan. 30.

According to court documents, officers were targeting commercial drivers destined for Canada from the United States, at the Sweetgrass Port of Entry in Montana.

At around 8 p.m., officers observed a freightliner semi-truck with Alberta licence plates and learned upon inspection that the driver was transporting a load of fresh bananas from California to Calgary.

A missing rear seal on the truck’s trailer led to officers doing a second inspection on the vehicle, which resulted in the discovery of seven unmarked boxes sitting on top of bananas in the back of the trailer.

The unmarked boxes were a different colour and size from the boxes of bananas, according to the release.

After opening the boxes, officers found a white powdery substance that appeared to be cocaine.

An analysis by the Drug Enforcement Administration confirmed the packages contained about 211 pounds of cocaine.

Gurpal Singh Gill, 39, pleaded guilty to possession with intent to distribute cocaine as charged in a superseding information.

Gill faces a mandatory minimum five years to 40 years in prison, a $5-million fine and at least four years of supervised release.

Assistant U.S. Attorney Jessica A. Betley is prosecuting the case, which was investigated by Homeland Security Investigations and U.S. Customs and Border Protection.

Gil’s sentencing has been set for Sept. 30, but he has been detained until further proceedings.