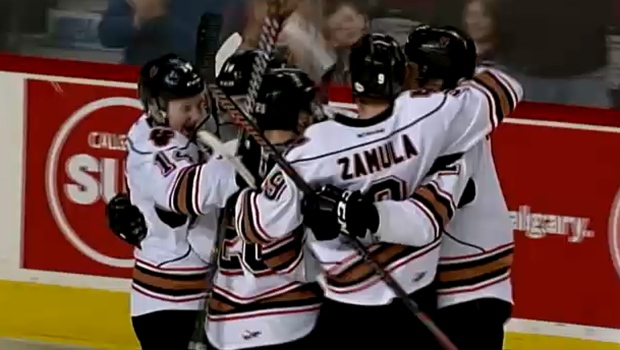 CALGARY — After having to shut down for two weeks because of a positive COVID-19 result, the Calgary Hitmen will return to action on Friday afternoon when they host the Lethbridge Hurricanes at the Seven Chiefs Sportsplex.

The season however won’t last much longer for the Hitmen after the league announced earlier this week there would be no playoffs.

“With all the various restrictions in place, particularly the Canada/United States border,” Robison said.

“We have a five team U.S. division and we knew it was going to be difficult to produce a champion and do our normal full series of four rounds” he said. “The Memorial Cup of course was cancelled and as a result we looked at it and said that probably the best thing to do would be to wrap things up after 24 games.”

The season has been a challenge.  There were positive tests for COVID-19 and some teams, including the Hitmen had to suspend team activities.

Even though it’s not the season they wanted, Robison said he was happy they were able to play some games.

“The games were highly competitive”,” he said.  “These are division rivals of course and the feedback we received from the teams is the players really enjoyed the opportunity to return to play.”

“They recognize the challenges we’ve had restarting the league and are appreciative of the opportunity.”

From the start, the WHL was calling this a developmental season.  Robison says it was important for the players to not miss a full season.

“I think you can make the argument that at this stage in their careers as players who are looking forward to showcasing their talents to the National Hockey League for the upcoming draft, or just continuing their development in the system, (that) it’s extremely important,” he said.  “To miss a season at this age would be extremely detrimental to their ongoing evolution as players, so we thought it was extremely important to get the season in.”

The WHL relies on its fans to generate revenue.  Robison is confident there will be a full season next year and he’s hopeful fans will be able to return to the stands.

“I think the challenge will be where are we with the vaccines and what extent have the general public been vaccinated.”

Robison says in the U.S. division all of the players and many of the fans have already been vaccinated so he says they are fully ready for next season.

As for the Hitmen, their season will end May 4, witht he team playing 21 games this season.