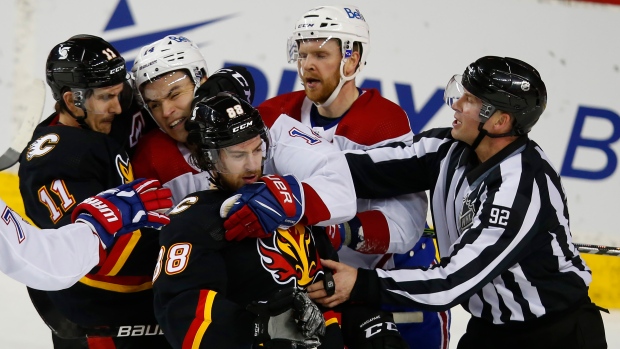 CALGARY — Darryl Sutter dedicated his first win in his second stint with the Calgary Flames to his mother and the team’s late president.

Josh Leivo scored twice for the Flames in a 2-1 win Thursday over the visiting Montreal Canadiens.

Sutter coached the Flames to victory in his first game behind Calgary’s bench after Geoff Ward was fired a week earlier.

He’d spent eight years in the Flames organization as coach and eventually GM between 2002 and 2010.

His mother Grace celebrated her birthday Thursday, which was also the one-year anniversary of the death of longtime Flames president and Sutter’s friend Ken King.

“This win is twofold here,” Sutter said. “One is for the late Ken King who we lost a year ago and the other is for my mother. It’s her 85th birthday today. This win is for those two.

Derek Ryan and Sam Bennett assisted on both Leivo goals for Calgary (12-12-3). Jacob Markstrom stopped 17-of-18 shots for the win.

Corey Perry scored for Montreal (12-7-7) and Jake Allen made 27 saves in the loss. Calgary hosts the Canadiens again Saturday.

The Flames were the more rested team having not played since Sunday. The Canadiens played their third road games in four nights, and were coming off a win less than 24 hours earlier in Vancouver.

“No question a little bit of tired legs, but every team is going through it right now and points are crucial,” Allen said.

“They came out and played a heavy, hard game. We knew they were going to do that obviously with a new coaching change. We just couldn’t find our groove tonight.

“We’ve played some really good hockey as of late and we’ve got to get to it again Saturday.”

Calgary moved to four points back of Montreal for the final playoff spot in the all-Canadian North Division.

The Flames allowed a season-low 18 shots on net.

“We played a patient game and pretty much a mistake-free game,” Sutter said. “There’s probably six or seven turnovers that we’re going to have to get out of our system.

“But you’re playing against a team that doesn’t give up much. To be able to come away with a win, we needed it. We’ll play a much better team on Saturday than we did tonight.”

Perry tipped Shea Weber’s bobbling shot from the point between Markstrom’s legs at 10:15 of the third period to pull the visitors within one goal.

A Paul Byron slashing minor at 17:24 hampered Montreal’s comeback, however, as the Canadiens weren’t able to pull Allen for an extra attacker until just over half a minute remaining in the game.

Weber’s pass from behind his own goal-line bounced off a teammate’s skate and into the open for Leivo to snare for his second goal of the game and third of the season.

The Innisfil, Ont., forward whipped the puck over Allen’s right shoulder at 13:55 of the second period for a 2-0 Flames lead.

Leivo scored his first at 1:52 finishing a tic-tac-toe passing play with Ryan and Bennett.

“It feels great. I don’t think I get those goals without the linemates and the way they played,” Leivo said.

“They worked hard, created some turnovers. I was just standing in the right spot. When you’re ready for it, sometimes the puck does in.”

Sutter had last coached the Flames on April 17, 2006 in a playoff game.

The 62-year-old from Viking, Alta., also returned to the NHL’s head-coaching ranks after an absence of almost four years.

Notes: Montreal forward Tomas Tatar played his 600th career NHL game. The Flames beat the Canadiens at the Saddledome for the first time since March 9, 2017.

— this report by The Canadian Press was first published March 11, 2021.