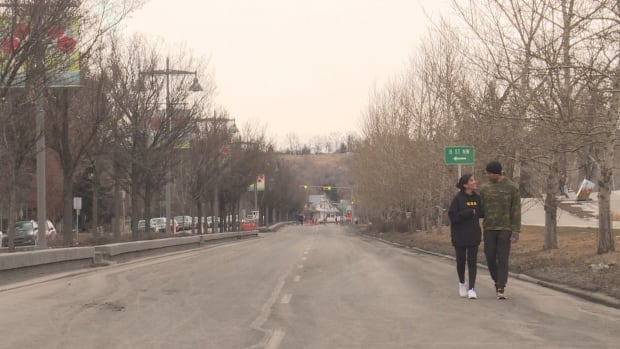 Calgary is expanding its Adaptive Roadways Program to include more roads starting Saturday in order to provide more space for residents to physically distance as the weather warms.

The program was first introduced last year as more people spent time outdoors due to the COVID-19 pandemic. City pathways were widened by closing certain roads and parking lanes to motor vehicles.

On March. 6, the city is closing two eastbound lanes on Memorial Drive between Ninth Street N.W. and the lower deck of the Centre Street bridge to cars.

The city will also close the entire lower deck of the Centre Street bridge between Riverfront Avenue S.E. and Memorial Drive N.W.

“What we’re trying to do is really target areas that are super congested. And certainly we saw in Eau Claire the pathway system was packed last weekend,” said Ward 7 Coun. Druh Farrell on the Calgary Eyeopener.

“We knew the weather was going to be beautiful on this weekend. And so we’re sort of monitoring it. And because we’re in a state of emergency, the administration is being incredibly responsive.”

Other roadways already widened include:

Farrell said city council has “learned to be more nimble in a whole number of different ways” and said pop-up patios will also be making a return.

“What I’ve been hearing is people are pretty blue right now … they’re tired. And so anything that we can do to get them out to enjoy the fresh air, we’ll try and do,” she said.

The roadways remain widened seven days a week. More locations will be added over the course of the spring and summer.