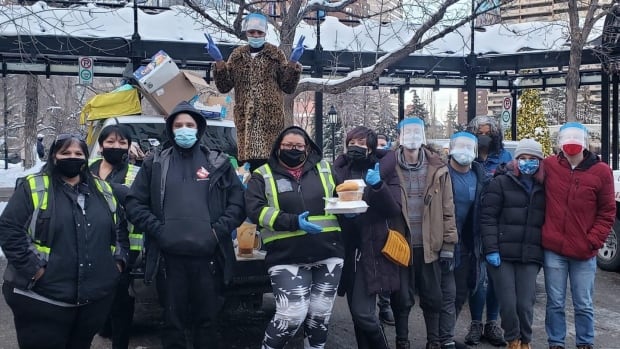 Every Friday, members of Calgary’s Bear Clan Patrol chapter hand out hand warmers, pick up needles and most importantly, make connections with the vulnerable people they meet as they walk through the city.

This Friday was Christmas Day.

Despite this holiday being a difficult one, the Indigenous community watch group’s Friday patrol made a small nod to consistency in these strange times.

“Fridays are our normal patrol day. We realize that not everybody acknowledges Christmas and this holiday, so we wanted to make sure that those people weren’t forgotten,”  said Brianna Gordon, a patrol member who is in charge of the group’s harm reduction work.

“Whether you celebrate Christmas or not, it’s important that everybody has has a good meal,” she said, speaking from Olympic Plaza, where she and other members handed out meals.

The group used seven vehicles to hand out about 250 prepackaged  dinners — turkey, pasta salad, buns and dessert — across the city. The food was donated and packaged by Border Crossing Bar and Grill, and bethechangeyyc and Inclusive Canada helped distribute the meals.

Gordon said the group has noticed an increase in hunger, especially during the latter half of this year. It’s been rough, she said, with people losing jobs, facing uncertain economic or health situations and experiencing difficulty accessing resources.

“We just wanted to let people know that they’re not forgotten and that even though there is this worldwide pandemic going on, we can still band together and and help each other out,” she said.

Gordon said the dinners were met with gratitude.

“Especially that it’s Christmas. People are surprised that we’re we’re doing this today,” she said.

Christmas Day caps of a week of giving for the group.

From Monday to Wednesday, the patrol distributed curbside food hampers to 113 elders and families in need. It took three days to complete the deliveries, due to the heavy snow that blanketed the city earlier in the week.