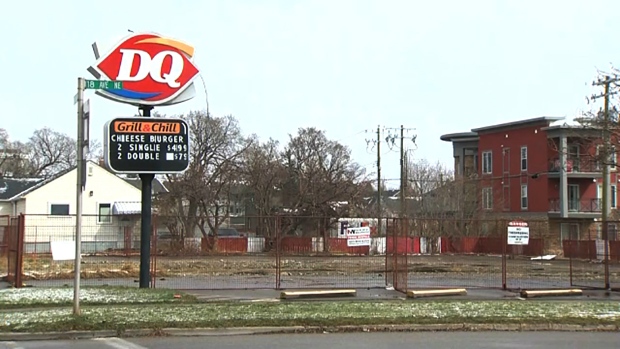 CALGARY — The property owner and franchisee of a Tuxedo Park Dairy Queen that burned down over a year ago just want to rebuild their restaurant and drive-through, but the City of Calgary has other thoughts about that.

“We ran the Dairy Queen ourselves for a while, then turned it over to other franchisees,” she said, in an interview with CTV News.

John Shim says his immigrant parents worked hard, doing multiple jobs, to give him and his sister a better life, “saving every penny that they made through those endeavours into this Dairy Queen.”

In 2019, an electrical fire burned it all to the ground.

“Everything we worked for as a family just got washed away,” Shim said.

To begin rebuilding, a development permit application was submitted last year to the city, but the city shot it down.

Instead of rebuilding their Dairy Queen, the city wants the Gordons to redevelop the space into a multi-story building with a Dairy Queen contained within it, and to scrap the drive-through.

“Without a drive-through, it’s nearly a death sentence for a fast-food restaurant,” Gordon said.

Ward 7 councilor Druh Farrell said she’s sympathetic to the Gordons’ situation, but because the business was burned down, the application must be reviewed as a new application in the evolving context of the location, noting that this situation is an opportunity to build something “even better.”

That has left the Gordons feeling exasperated.

“We’re not a developer,” Gordon said, “and at our stage of life, we’re looking to retire and we’re just looking to rebuild the Dairy Queen. It’s as simple as that.”

They have appealed the City’s decision and are hoping municipal officials take their pleas to heart.

The appeal hearing was held Thursday, and a written decision will be delivered within two weeks.