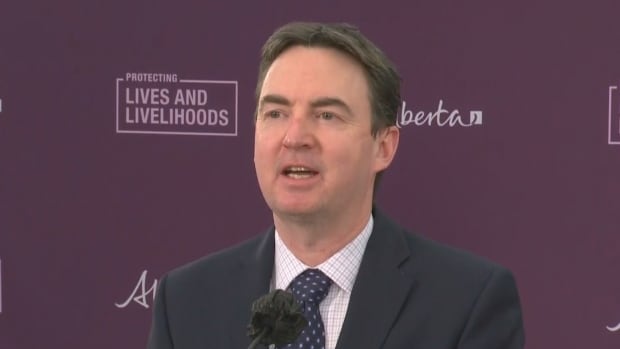 The Alberta government plans to change employment standards as soon as possible to allow workers three hours of paid leave to get vaccinated against COVID-19.

Minister of Labour and Immigration Jason Copping said the government will introduce legislation on Wednesday to amend the Employment Standards Act and plans to have it passed and come into effect upon first reading.

“As you all know, the vaccine program is ramping up and although there are some hiccups in regards to supply, vaccines are becoming more [widely] available,” Copping said Wednesday at a news conference.

For that reason, he said, the government intends to introduce legislation to amend the employment standards code to provide COVID-19 vaccine leave.

If passed, the amendment would give Albertans up to three hours of paid time off to get their shots, Copping said.

“As with other leaves, Albertans cannot be fired or disciplined by their employer for taking this leave. Leave can be used twice if Albertans are getting a two-dose vaccine.”

The leave, which applies to full-time and part-time workers, regardless of their length of service, would take effect upon first reading in the legislature, he said.

The idea was first floated by the Oppostion on Tuesday when NDP Leader Rachel Notley raised the issue during question period. Premier Jason Kenney said at the time he would look into it.

Copping said the government consulted with the Opposition before bringing forward the proposed amendment.

“This is something we’ve been watching for a number of weeks,” he said. “As you may know, Saskatchewan passed a similar paid vaccine protected leave; B.C. just introduced this in the house this week. A question was raised by the leader of the Opposition, and our premier made a commitment that we would look seriously at this issue, which we are.”

Notley said on Wednesday she was pleased that the province will fast-track a bill similar to those in B.C. and Saskatchewan.

“This is good news for Alberta workers and good news for Alberta’s economy,” Notley said. “These three hours of leave will benefit hundreds of thousands of working Albertans, because no one wants to log in to book their vaccine just to see that the only spots left are during their work hours when they can’t otherwise afford to leave.

“Lost income is already a barrier for so many working people throughout this COVID period in these difficult times but it should not be a barrier to vaccination. So I’m proud to help tear that barrier down, speed up the vaccination program and speed up our economic recovery.”

Copping said no one in Alberta should have to choose between getting vaccinated and collecting a paycheque.

“But getting more people immunized means that we are getting closer to be able to reopen our economy. It makes it easier for Albertans to get vaccines, taking us one step closer to the end of this pandemic.”