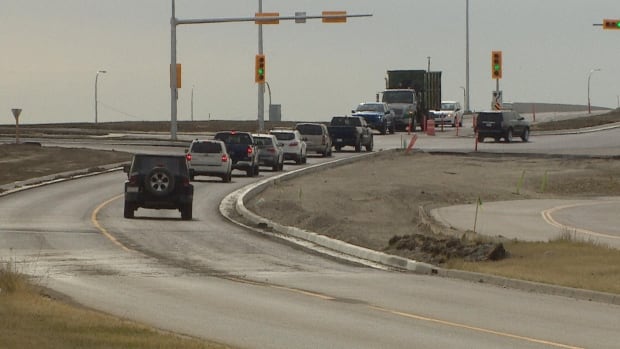 A third person has died and a fourth remains in life-threatening condition after two vehicles collided where James McKevitt Road merges onto on Stoney Trail in southwest Calgary.

Police earlier reported that two people in their 70s who were passengers in a car that collided with a truck had died in the crash Monday night.

On Tuesday morning, the Calgary Police Service issued an update saying the driver of the car, a woman in her 40s, had also died, in hospital. The truck’s driver, a 33-year-old man, remains in hospital with life-threatening injuries, police said.

At the same time, a 48-year-old woman driving with two passengers in a 2010 Honda Insight was merging onto westbound Stoney Trail from James McKevitt Road.

A 72-year-old woman was sitting in the front passenger seat and a 77-year-old man in the rear seat.

Before the Honda had completely merged, it turned left across the westbound lanes of Stoney Trail, police said in the release.

The truck hit the car on the driver’s side and both vehicles continued west for a ways before stopping in the eastbound lane of Stoney Trail.

The passengers of the car were declared dead on the scene by EMS.

Alcohol, drugs and excessive speed aren’t believed to be factors.

The intersection is currently under construction, and opened to drivers just this past weekend.

Transportation Minister Ric McIver said in an emailed statement that following any incident in a construction zone, Alberta Transportation reviews safety measures, including signage, that was in place in the area.

“My heart breaks for those killed in a fatal collision last night on Highway 22X. On behalf of my colleagues in the Government of Alberta, I send my condolences to their families,” he said.

Police ask anyone who witnessed the crash to call their non-emergency number at 403-266-1234 or contact Crime Stoppers anonymously.