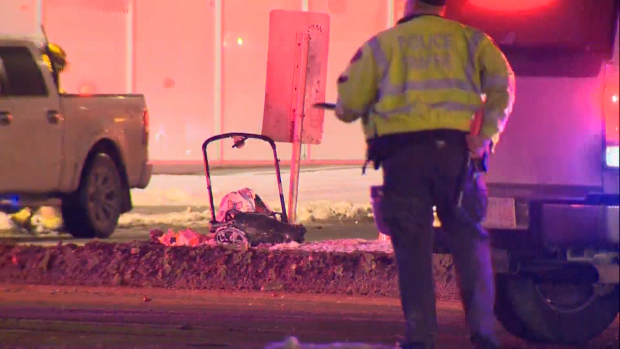 CALGARY — A driver was taken into custody after a 21-year-old man, a 20-year-old woman and a one-year-old child in a stroller were hit by a vehicle Thursday evening in the city’s southwest.

The incident took place at around 8:15 p.m. near the intersection of Macleod Trail and Glenmore Trail, just south of CF Chinook Centre.

According to police, a GMC Terrain was travelling southbound on Macleod Trail when the driver attempted to turn right and enter the westbound lanes of Glenmore Trail. The two adults and the child, who was strapped into the stroller, were standing on the concrete island as they waited to cross the road and continue south.

Investigators say the driver of the Terrain, a 28-year-old man, failed to navigate the turn and struck the pedestrians, drove over two additional concrete islands and hit a snowbank before coming to a stop.The driver attempted to flee the scene on foot but was arrested by police a short time later.

One of the three pedestrians, the 21-year-old man, was pronounced dead on scene while the 20-year-old woman and infant were transported by ambulance to hospital.

A third patient, the driver of the vehicle, was also transported to hospital as a precautionary measure.

According to police, excessive speed and drug use are being investgated as suspected factors in the fatal crash.

Anyone who witnessed the crash or has dash cam footage of the GMC Terrain is asked to contact the Calgary Police Service at 403-266-1234 or anonymous tips may be submitted to Crime Stoppers.