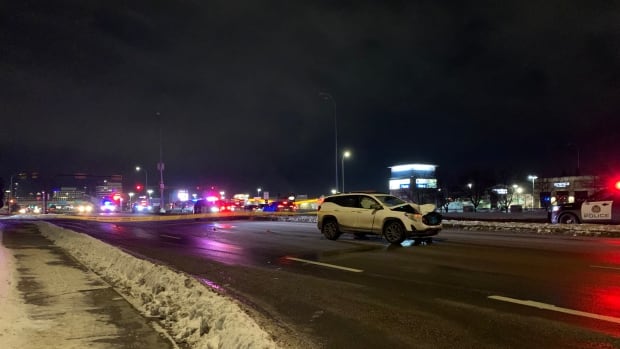 EMS says one pedestrian has died and three have been taken to hospital including a child in life-threatening condition after a crash in Calgary’s southwest Thursday night.

A vehicle was driving eastbound on Glenmore Trail at 8:15 p.m. when it turned southbound on Macleod Trail and struck several pedestrians, said Calgary Police Service.

One adult was declared deceased at the scene.

According to EMS, a child was taken to Alberta’s Children Hospital in serious, life-threatening condition and an adult was taken to Foothills Medical Centre in serious condition.

A third person was also transported to Foothills Hospital but EMS is unaware of their injuries and involvement in the accident.

Police say the driver was arrested at a nearby Tim Hortons and was later taken to hospital for assessment.

EMS and police have not confirmed the age or genders of those involved.